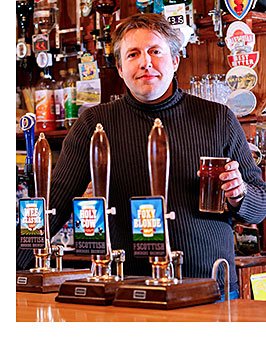 THE man behind Scotland’s first self-styled ‘plough to pint’ ales has moved into the on-trade.

John Henderson, who launched the Scottish Borders Brewery in January last year, has stepped into to save his local, the Cross Keys in the village of Ancram, near Jedburgh.
And the brewer, whose beers are stocked by more than 200 outlets across Scotland and the north of England, hopes to turn the pub into a destination for ale enthusiasts.
“Three pubs are closing in Scotland each week and when the Cross Keys was placed on the market I was keen to purchase it to ensure its future as a village pub,” John said.
“I want to build the Cross Keys into a real community hub – a place you can go to enjoy good company and great beer.
“The real ale sector of the drinks market is continuing to prosper and pubs that offer high quality cask ales are growing in popularity as destinations.”
John also hopes to introduce food and accommodation to the traditional inn, which he reckons is an ideal base from which tourists can explore what the Borders has to offer. He pledged to feature guest ales from around the region as well as his own at the bar.
“I really hope to build the pub into a showcase cask ale bar for the Scottish Borders,” he said.