Travelodge to open new Glasgow hotel ahead of Commonwealth Games

TRAVELODGE is to open its sixth hotel in the Glasgow area in time for the city hosting the Commonwealth Games.

The budget hotel firm has unveiled plans for a 171-bedroom hotel at Charlotte House on Queen Street, which it aims to open in spring 2014.
It has agreed a 25-year lease on 11 of the building’s 12 office floors, which were previously occupied by Glasgow City Council; the ground and first floors will remain as retail and office space. 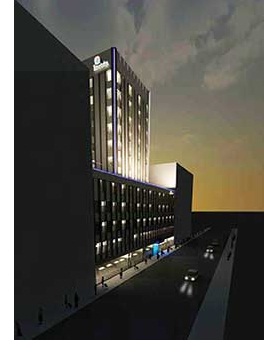 Developer SCOT Sheridan is to undertake the £16.4 million redevelopment of the building with joint-venture partner, Curo Property Funds LLP.
The hotel is being developed as part of the Business Premises Renovation Allowance scheme (BPRA), which aims to encourage the conversion and renovation of empty business premises in specific areas.
The scheme was extended by Chancellor George Osborne in his 2011 budget as part of the UK government’s efforts to stimulate development.
Confirmation of the new Glasgow hotel comes after Travelodge opened two new hotels in Edinburgh.
In what the hotel operator described as a UK first, it launched a 96-bedroom hotel above the Top Shop store on Princes Street; it also opened an 85-room hotel on the capital’s Queen Street.
Tony O’Brien, UK development director at Travelodge, said the new Glasgow hotel will be its sixth in the area.
“Our new Queen Street site is in the heart of Glasgow’s central shopping district and is in a similar, fantastic location to our recently opened Travelodge above Top Shop on Princes Street, Edinburgh,” he said.
“We are now located perfectly for shoppers, business people and tourists looking to visit either city.
“Queen Street will be our sixth hotel in Glasgow, testament to the hard work of our retained property agent in Scotland, Sandy Cameron and Co.
“With over 40 hotels set to open across the UK this year, it is a busy time for Travelodge and Scotland is crucial to our future growth strategy.”

Image: The Travelodge will have 171 rooms.