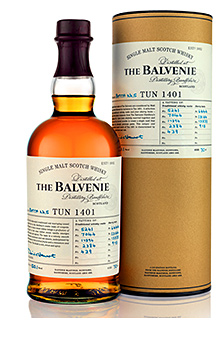 THE Balvenie has launched a new single malt married from just nine casks of the distillery’s spirit.

The release of The Balvenie Tun 1401 Batch 5 comes after Batch 3 was awarded a double gold medal at the San Francisco World Spirits Competition.
To craft The Balvenie Tun 1401, malt master David Stewart selected whisky which had been maturing in five traditional whisky casks and four sherry butts in Warehouse 24. The contents were then transferred into Tun 1401 – a traditional oak marrying vessel.
“Five very rare crafts and a long wait have gone into making these vintage whiskies and it’s important this single malt meets the expectations of what has become a sought after release by our drinkers,” said Stewart.