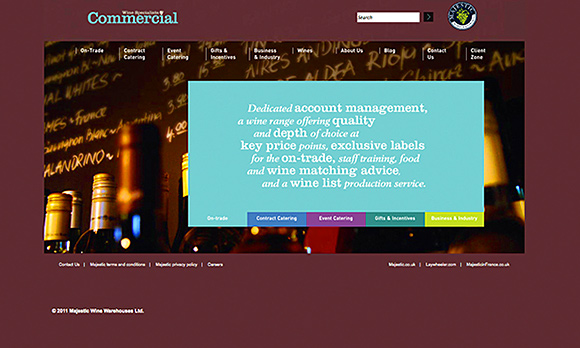 WINE merchant Majestic is seeking to grow the number of on-trade businesses it supplies after posting strong financial results.

The firm, which operates 181 stores across the UK, reported a 14.5% increase in pre-tax profits to £23.2 million for the 53 weeks to April 2 2012. Total sales increased by 8.9% to £280.3m, which included a 6.9% increase in business-to-business sales.
Chief executive Steve Lewis said the firm’s Majestic Commercial corporate division, which was set up in 1994 to supply wine to businesses, aims to increase the number of restaurants, hotels and pubs it supplies. Currently around half of its 2000 commercial accounts are on-trade businesses.
“We see good prospects for further rapid growth of our sales to on-trade customers,” said Lewis.
“We hold extensive stocks at each of our locations with the ability to offer credit facilities and arrange deliveries seven days a week. Sales to business customers increased 6.9% on last year and now represent 24% of total UK sales.”
Elsewhere the company reported an 11.1% increase in the number of customers making purchases, with the average spend per transaction up by £2 to £128.
Online spend increased by 7.8% in the course of the year and now represents 10% of all Majestic sales.
The financial year also saw the company opening 16 new stores, including shops in Livingston and Dundee. Since the beginning of the new financial year Majestic has also opened a store on Edinburgh’s Queensferry Road and said it aims to increase its estate to 330 locations.
Majestic wasn’t the only wine merchant to report strong trading over the past year, however.
Bibendum also recently announced strong financial results, with pre-tax profits up 25% in the year to March 31 and turnover up to £185m.
Managing director Michael Saunders described the figures as “pleasing”.
“Current conditions are a challenge for any business, but I am delighted that we have not only grown sales, but also ensured we are more profitable,”
he said.
“We have achieved this result by focusing on the needs of our customers, streamlining internal processes and making sure we operate as efficiently as possible.”

Image: Around half of Majestic Commercial’s 2000 accounts are on-trade customers.