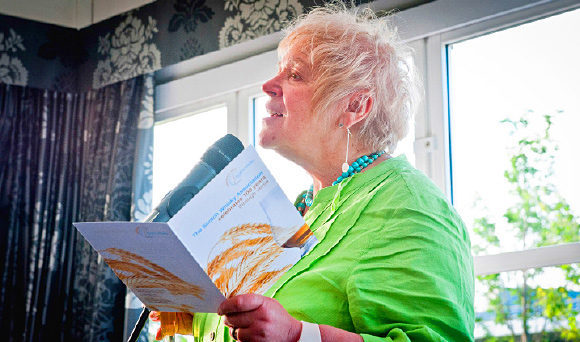 Lochhead recited her specially-commissioned poem, ‘For the centenary of the Scotch Whisky Association’, to guests at an evening reception in the rooftop garden of The Glasshouse Hotel.
The poem, which draws on Robert Burns’ famous declaration that “freedom an whisky gang thegither”, celebrates the “growing and maturing taste for Scotch and its association with poetry and friendship”.
Lochhead was introduced by current SWA president Ian Curle, chief executive of Edrington, after a welcome by association boss Gavin Hewitt.
The reception marked the start of a 100-day countdown to the SWA’s actual centenary in October. A major exhibition is being held in the Scottish Parliament in November as part of the celebrations, featuring previously unseen exhibits.