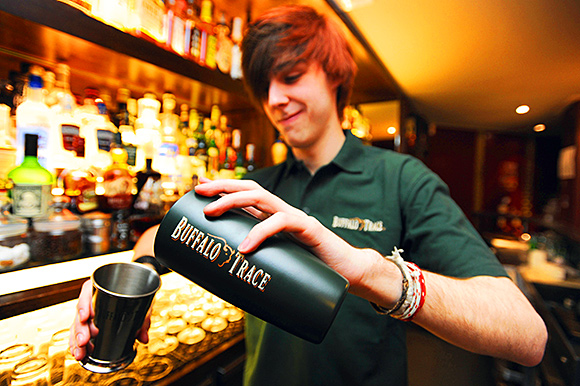 SCOTLAND’S credentials as a whisky producer are well established, but it seems Scottish consumers have a growing thirst for whiskies with an American flavour.

The volume of American whiskey, including Bourbon, sold in Scotland was up 13.5% in the last year, ahead of the 9.5% growth seen in Britain as a whole, according to CGA figures supplied by Maxxium UK; sales were up 23.7% in value terms.
That Scottish consumers are reckoned to have a general affinity with darker, more complex spirits is credited with bolstering Bourbon sales.
“We see that across other categories as well, in terms of rums and dark rums,” said Crispin Stephens, marketing manager for American whiskey at Bacardi Brown-Forman Brands.
“There is a natural affinity to dark spirits.”
Jeremy Hill, chairman of Buffalo Trace distributor Hi-Spirits, also reckons there’s a general preference for dark spirits among drinkers north of the border.
But he said Bourbon’s image has also played a role in its apparent success, particularly among younger consumers.
“It may seem counter-intuitive that Bourbon is building its market share on the ‘home turf’ of Scotch whisky, but it is doing so for the same reasons that Bourbon is increasing its appeal in the on-trade in other parts of the UK,” Hill said.
“Marketing for Scotch whisky focuses on its heritage and aims to build a mystique. This can make it inaccessible to younger consumers in particular.
“Bourbon doesn’t carry the same marketing baggage as Scotch, and is also far more user-friendly in terms of cocktails and long drinks.”
Wayne Collins of Maxxium UK, which distributes Bourbon brands Jim Beam, Maker’s Mark and Knob Creek, said American whiskey-based cocktails, like the Manhattan, Old Fashioned and Mint Julep, are helping establish Bourbon in the drinks repertoires of younger consumers.
He said: “The younger generation, guys of 22/23, are walking into to bars now and saying ‘can I have a Manhattan please?’
“And they’ll choose their Bourbon and their vermouth and various things.
“They know what they want and they know how to ask for it.”
The launch of several flavoured American whiskies, including Jim Beam Red Stag (infused with black cherry) and Honey and Jack Daniel’s Tennessee Honey, is also reckoned to have broadened the category’s appeal.
Collins said the Jim Beam variants were launched in response to growing demand for flavoured spirits.
“It seems to me that there’s an interest today in sweeter-tasting products,” he said.
Stephens at BBFB agreed, describing honey-infused whiskies as “more accessible”.
“The honey gives it a sweetness; it gives it a smoothness,” he added.
“Whether you drink it on its own, over ice or mixed it’s much easier on the palate.”

Image: Bourbon is a versatile base for cocktails, said the firm behind Buffalo Trace.