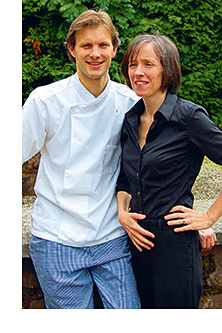 A PERTHSHIRE restaurant celebrated its fifth birthday in style last month when it was named Scotland’s Country Restaurant of the Year at the Scottish Hotel Awards.

Barley Bree, a six-bedroom restaurant with rooms in Muthill, near Crieff, won the award two weeks after a Champagne and canapés reception to mark its milestone.
“We are thrilled to have been voted Scotland’s best country restaurant, especially because there are so many marvellous places to eat out in the countryside and competition is intense,” said Alison Bouteloup, who owns Barley Bree with husband, and head chef, Fabrice.
“It’s wonderful to have been given this recognition by experts only five years since starting Barley Bree.
“We try to complement Fabrice’s skills in the kitchen with an excellent selection of wines and by providing consistently good service in a relaxing setting.”
A new energy-efficient kitchen has been installed that includes a custom-built stove and hobs and special fridge and freezer compartments.