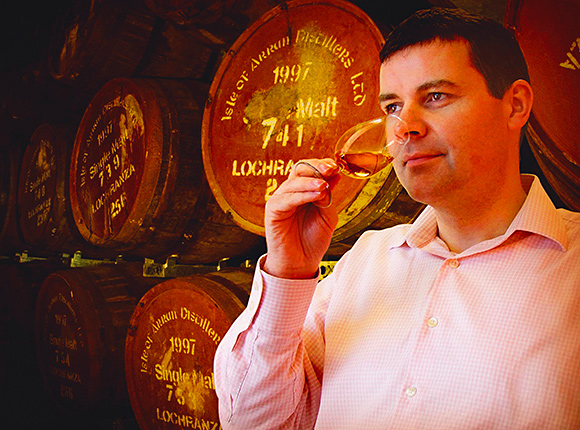 DIAGEO’S plans to ramp up whisky production over the next five years will ultimately benefit smaller single malt producers.

The country’s biggest Scotch producer says it will build a new distillery and expand existing production facilities to keep up with the anticipated demand from emerging markets.
Much of the enhanced production will be used for blended Scotch but Arran Distillery boss Euan Mitchell reckons drinkers who start on blends will ultimately switch to malts. And that’s where he thinks distillers like Arran can benefit.
“The confidence of an industry giant to invest shows demand for the drink, both in the UK and overseas, is set to continue to grow,” Mitchell said.
“By forging more paths into emerging markets, this represents great news for us as many consumers will begin by drinking blended whisky and then eventually move on to try single malts, which is where we’ll really see the benefit.”
Mitchell, speaking as the firm reported a 113% rise in net profits, on turnover up almost 14% to more than £3m, said the distiller was already planning for the future.
Production has already been ramped up to 350,000 litres a year, with output scheduled to rise to 400,000 this year. A new warehouse has enabled the firm to double its storage capability on Arran.
“Our expectation is to see a strong growth in our profits each year as the business is exactly on track with our ambitious business plan,” added Mitchell.