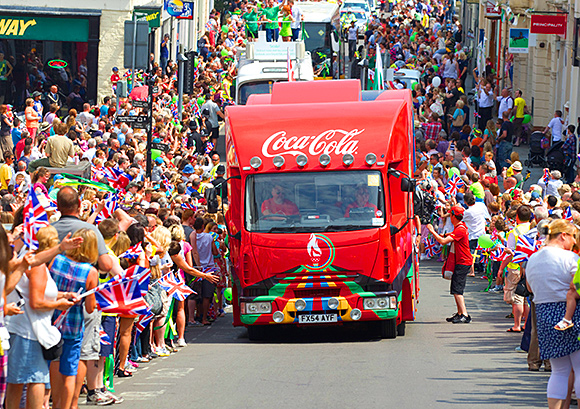 THE Scottish leg of the Olympic torch relay brought a welcome boost to trade for operators with outlets along the route.

The flame arrived in the south west port of Stranraer on Friday June 8, travelling through Ayrshire and the south side of Glasgow before reaching the city centre on the Friday evening. The following day, the torch made its way north, passing through Fort William and Drumnadrochit to Inverness. The relay then took in Orkney, Shetland, Aberdeen, Dundee, St Andrews and Edinburgh, where it was due to leave today (June 14) to head through the Borders and back down south.
Operators based along the route said the event had boosted trade.
In Giffnock, on Glasgow’s south side, the team at the Orchard Park pulled out all the stops for the torch’s arrival at 5.15pm on Friday June 8.
A gazebo, barbecue, extra fridges and seats were hired; an outdoor bar was set up; and staffing levels were upped from the usual nine for a Friday during the day to 15.
Chris Capaldi, whose family has owned the hotel since the 1980s, told SLTN that trade doubled.
“We went to town on it but we knew there would be thousands of people there,” he said.
“It was fantastic for us – really busy before and after the torch came through Giffnock and it was a really good atmosphere; there were loads of families in.
“We had Carling on draught outside; they [Coors] were very helpful, and we probably did about three kegs out there alone. We also had wine in the big outdoor fridges we hired.
“After the torch relay, the football [Euro 2012] kicked off so it was a really busy day.
“The staff were all cream-crackered but they enjoyed it. It was all worth it.”
John Beach, who owns Fiddler’s in Drumnadrochit, told SLTN via Twitter that the torch’s arrival in the Highland village had been good for business. “[There were] big crowds, good weather and [it was] quite a spectacle,” he said.
Ally Smith, owner of the Volunteer Arms in Fort William, told SLTN the torch relay brought a slight uplift in trade.
“It did have some impact because there were more people about,” he said.
“But I thought they would walk along the High Street; they just sprinted past.
“The football had a really positive impact on business that weekend and the times of the games are really good.
“And we’re going to make a big deal of the Olympics. Fort William is a big tourist town so we’ll be doing full coverage of the Olympics.”
Meanwhile, three members of staff from Glasgow’s Holiday Inn Theatreland hotel, run by Chardon Management, were selected as torchbearers.
Guest services manager George McMillan, executive housekeeper Maureen Roger and chef de partie Jordan Shane carried the flame at various stages of its journey through Glasgow.