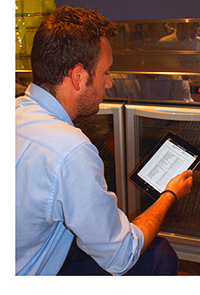 AN equipment servicing company in Clydebank claims to have increased its efficiency by arming its engineers with iPads.

Mario Formisano, managing director of One Call, which services refrigeration, gas, and electric equipment, said the technology allows his engineers to instantly access thousands of manuals and order parts, eliminating paperwork; it also enables them to update customers on their call-out status.
Mario, who began his career as a coffee machine engineer, aged 17, said changes in the marketplace have given rise to a demand for streamlined servicing.
“It’s hard enough for operators just now – if something goes wrong in the kitchen they don’t have time to hunt for the right specialist engineer and then hope he turns up,” he explained.
“One Call is exactly that – one call. Our engineers can deal with anything – I’d say seven out of ten jobs can be done within the hour and if they need to order a part, we’ll have it the next day.”
One Call’s trade customers include the Radisson Blu hotel in Edinburgh, Glasgow restaurant group La Vita and city centre outlet Drop Bar.