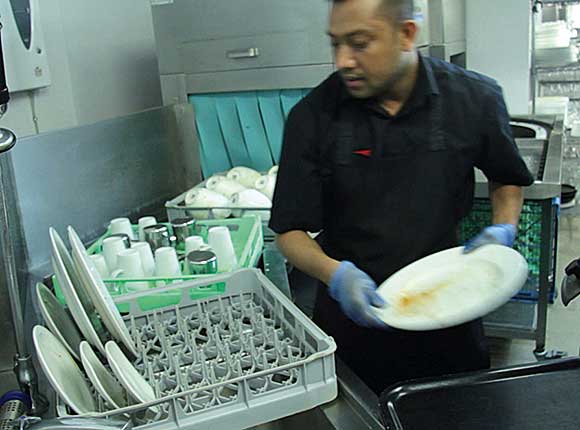 What a modern warewasher is going to be quicker at washing dishes than a kitchen porter – but by how much?

Recently Winterhalter went to the busy Cafe in the Crypt in London’s Trafalgar Square to pit the in-house Winterhalter MTR2 against a kitchen porter to properly measure kitchen porter power (KPP).
First off kitchen assistant Jutu Miah loaded four racks of dirty bowls, plates, tea pots and cutlery and sent them through the MTR2. In just 3 minutes 24 seconds it was all washed, rinsed and dried. Then he set about the kitchen porter’s task of washing a similar load by hand – it took him a staggering 23 minutes and 54 seconds to get it all done.
“The experiment showed how much more productive you are when you release the power of the kitchen porter to perform other duties,” explains head chef at Cafe in the Crypt, Stuart House. “While the machine is washing the kitchen porter can do other things.”