THE man behind Scotland’s newest craft brewery has revealed the inspiration behind the micro’s inaugural beers.

Ex-Molson Coors chief Paul Miller will next month launch the Eden Brewery in St Andrews, with a three-strong portfolio comprising the 19th Brew IPA, The Clock Brew (a traditional Scottish ale) and The Seggie Porter. 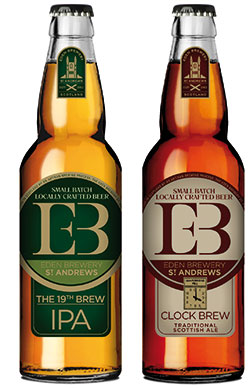 Miller told SLTN that several factors inspired the styles, recipes and presentation of the range, from St Andrews’ golfing heritage to the paper mill past of the brewery at Guardbridge, just outside the town.
The views of the local trade were also canvassed at sampling events held at Maclay Inns’ West Port Bar & Kitchen in St Andrews, which partly led to the development of the 19th Brew – designed to offer a refreshing pint after a round of golf.
The Clock is a direct reference to the clock on the wall of the old paper mill, considered to be a local landmark, while the Seggie namechecks the distillery that existed on the site more than a century ago.
“The interesting thing about the site is that it actually was a distillery and there was some brewing on the site 120 years ago,” he said. “It does have its own bore holes so there are some interesting things about the site itself.
“The initial products relate to local interests. The porter is called the Seggie Porter, basically because that was the name of the distillery, and the local farm area is called the Seggie. There’s also an iconic clock on the wall of the old paper mill, which is what Guardbridge was, that everyone in the area knows. It’s where everyone used to clock in and out of work so it’s kind of a local landmark.”
Going forward, Miller said product innovation would be a major focus for the brewer, which next year will be involved in celebrations marking the 600th anniversary of the town’s university. Eden will make a beer representing styles from each of the six centuries, including a heather ale, an IPA and wood-matured products.
“We’re doing an awful lot of work with wood cask finishes and work linked to local produce – particularly locally-farmed fruit – that will go into some innovative and creative brews as well,” he said. “That’s where Scott [Gowans], the new brewer, has done a lot of work and it’s an area he’ll be contributing to.”