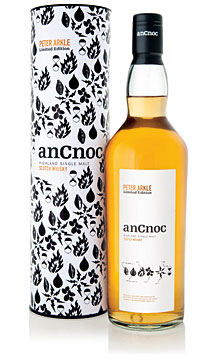 In a first for the anCnoc brand, the whisky has been wholly matured in Spanish oak sherry barrels, and each release will be accompanied by a series of designs by New York-based Arkle, following a visit to the Knockdhu distillery last year.
Only 1000 cases of the first special edition whisky will be launched, with all 200 UK cases sold by Royal Mile Whiskies.
A second limited edition release will be launched later in the year.
Gillian Gibson, brand manager at anCnoc, said Arkle’s “Scottish roots, vivid and quirky style and genuine love for whisky made him the ideal choice as a collaborative partner”.