BARS and clubs across the UK could be in line for a visit from Captain Morgan next month as part of the first football marketing campaign for the spiced rum brand. 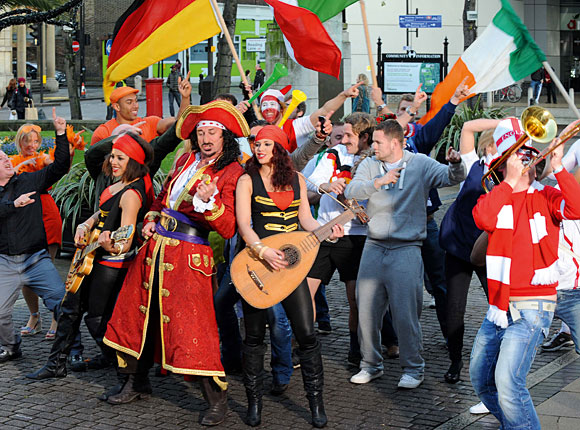 Accompanied by the ‘Morganettes’, the Captain Morgan character will visit 150 selected outlets armed with a treasure chest and keys, which will be handed out to revellers to give them a chance of opening the chest and winning one of 150,000 prizes.
Point of sale material, including trophy-shaped pitchers promoting a sharing serve for the Captain and Cola and Captain Morgan-branded armbands, will be distributed to 10,000 bars and clubs next month, coinciding with the Euro 2012 kick-off.
The on-trade activity is part of a campaign which also includes the release of an unofficial football anthem alongside a humorous music video featuring ‘lookalikes’ of some well known football personalities and parodies of their off-pitch antics.
Designed to drum up ‘post match banter’ between football fans, the Captain’s Orders phone app, which is free to download, dishes out fun forfeits for consumers; those who share their successful forfeits on Facebook will have the chance to win on the spot prizes via the Captain Morgan’s Spiced Facebook page.

The campaign will help thousands of licensees who want their customers to stay on after the final whistle.

Violeta Andreeva, brand manager of Captain Morgan’s Spiced, said the campaign is “well-positioned to drive footfall and incremental sales over the football season”.
“Captain Morgan will steal the show around football in June – we have developed a few really innovative tools to help football fans make the most of the long summer evenings, enjoying the football and help them to party like champions regardless of what the game result is,” she said.
“This campaign will benefit thousands of licensees who already are trying to get their customers to stay on long after the final whistle has been blown.”