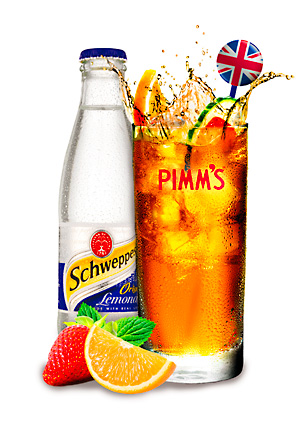 DRINKS giants Diageo and Coca-Cola Enterprises (CCE) are looking to capitalise on what they anticipate will be a sense of patriotism around the UK this summer with the latest phase of their joint marketing activity.

The companies’ ‘A Celebratory British Summer’ campaign will revolve around long mixed drinks and will see themed point of sale materials – including quirky Union Jack drink stirrers – distributed to pubs across the UK.
Diageo is also releasing limited edition, union flag bottles for its Gordon’s and Pimm’s brands, which will be promoted alongside ‘perfect serve partners’ Schweppes Tonic and Schweppes Lemonade in outlets.
“Following the increase in British patriotism around the royal wedding in 2011, we anticipate a continued consumer appetite for British brands during this summer’s activity,” said Amy Mooney, senior category manager at Diageo GB.
“Last year the royal wedding helped spirits sales in the on-trade increase by 13%.
“This year the activation platform of ‘A Celebratory British Summer’ delivers plenty of potential for similar spikes of activity around certain brands, occasions or events that can ultimately stretch across the summer.”
Diageo has stressed the importance of the summer trading period to spirits sales.
Quoting figures from AC Nielsen, the company reports that on-trade spirits sales increased by 5% between summer 2010 and summer 2011, rising to a value of £1.76m last year.
Separate figures, this time from research company TNS, reveal that 37% of drinkers claim they would order a spirit and mixer in the pub if those drinks were served better.
Last summer was said to have been healthy for Pimm’s, with on-trade sales up by 69% and the on-trade accounting for 59% of the brand’s total sales during the summer months.
“We are delighted to be working with Diageo GB once again, to celebrate what is likely to be a huge British summer,” said Colm O’Dwyer, director of sales and customer development, out of home, at CCE.
“Schweppes is an iconic British brand and one consumers will look towards to make the most of their summer events as they toast the Diamond Jubilee and cheer on the national teams during the long summer of sport.”
The joint campaign, said to be worth £3.5m, will include the distribution of point of sale materials such as strut cards, table talkers, bar runners, optic clips, back bar displays, A3 posters and branded glassware.
The collectable drink stirrers include one in the shape of a sceptre, in reference to the Diamond Jubilee, and another in the shape of a tennis ball, referencing Wimbledon.
The in-outlet activity will be supported by an integrated marketing campaign, including outdoor, radio, press and digital advertising. The adverts focus on drinks serves relating to the various events taking place throughout the summer, including the London Olympics.
The ‘A Celebratory British Summer’ campaign marks the third year that Coca-Cola Enterprises and Diageo have joined forces to promote their spirit/mixer combinations.