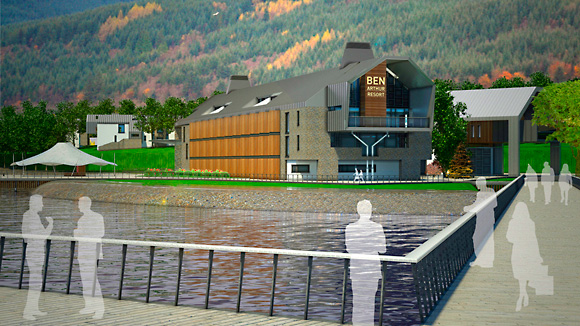 A FIVE-star hotel is to be the centrepiece of a proposed new resort on the site of a former torpedo testing range on Loch Long, near Arrochar.

Global property consultant Knight Frank confirmed it is currently in “serious negotiations” with a potential operator for the 130 bedroom hotel, which will form part of the proposed Ben Arthur Resort.
The scheme, which is currently out for consultation with the Loch Lomond and Trossachs National Park Authority, also includes plans for a marina and 52 houses, 36 of which will be offered on a fractional ownership basis.
The resort’s design, created by architectural firm Archial, is set to reflect its location on Loch Long at the foot of Ben Arthur, also known as The Cobbler.
Knight Frank said an announcement will be made regarding the hotel operator in due course.
“We are in detailed conversation with a five-star hotel operator and one of the world’s leading marine operators to provide what will be seen as a world class facility,” said partner Drew Oswald.
“Sailing is seen as a fast-growing business for the Clyde Estuary and Scotland’s west coast, and this facility provides not only access to some of the best sailing in the world, but is an instant access point to the national park.”
Gordon Watson, national park director of rural development and planning, said: ”We see the site as an opportunity to encourage more tourism on our sea lochs and bring more economic growth vital to our communities. I look forward to seeing the comments made by local people in the pre-application consultation as the early designs look very promising.”