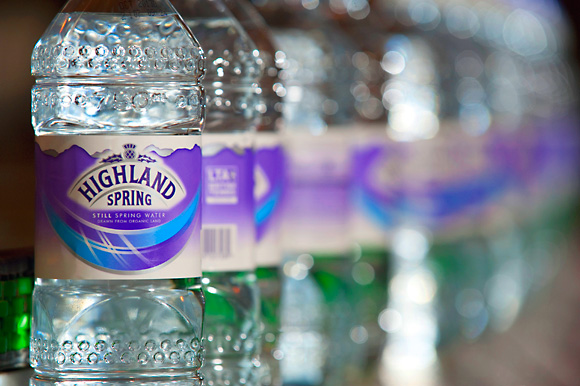 SMALL formats and sparkling water represent the largest potential for growing bottled water sales in the on-trade, according to Scotland’s biggest producer.

Highland Spring Group told SLTN last week that 80% of all still water sold in the on-trade is in either 330ml or 500ml bottles, with the 330ml format accounting for 87% of sparkling water sales.
And the company’s head of brand marketing, Paul Condron, reckons there’s room to grow sales further, despite the challenging climate.
“Already one of the largest water brands in the on-trade, we believe there is still room for growth – particularly with food-led outlets – and we are actively looking to grow our on-trade share in line with strong performances in other channels,” he said.
Sparkling water has particular potential, said Condron, as it already accounts for a larger share of water sales in the on-trade than it does in other channels – 32% of bottled water sales by volume in pubs, hotels and restaurants compared to 14% of the total bottled water market.
Last year Highland Spring embarked on a new initiative aimed at boosting sales of its own sparkling water in bars and pubs.
“As the clear market leader in sparkling water, we’ve been focusing our efforts on broadening sparkling consumption by promoting new serving occasions,” said Condron.
“In 2011 we partnered with some of the UK’s leading mixologists, including Wayne Collins, to create unique sparkling cocktails and mocktails, marketing these to consumers at sampling events and via online campaigns. We’ll be building this campaign in 2012 with activity kicking off in the summer.”
In fact, the summer months are the ideal time to stock up on bottled water, said Condron, as a temperature increase of even a single degree can boost sales by four times.
“With staple events such as Wimbledon, in addition to the Olympics, the European Championships and cultural events like the Queen’s Diamond Jubilee, it’s important for outlets to stock the right range and to keep topped up as the weather improves,” he said.
2012 has already been an eventful year for Highland Spring Group.
In addition to moving up to the top spot as the UK’s biggest producer of bottled water – and the number two brand – the company has re-designed its packaging and embarked on a new marketing campaign, titled ‘full of the joys of Highland Spring’.
The activity included a new television advertising campaign – the brand’s first in four years – featuring a voiceover by Scottish actress Kelly Macdonald.
“We’re confident the new branding will appeal to our existing consumers while also encouraging new consumers to consider the brand,” said Condron.
“It is bold, clean and contemporary yet still retains those elements which consumers instantly recognise as Highland Spring.
“Our provenance and purity are core brand values and both are increasingly important to consumers as they seek out local products from a source they can trust.”