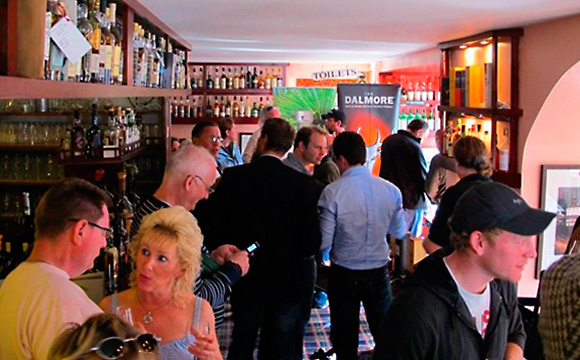 THERE’S more to this summer than the Queen’s Diamond Jubilee, Euro 2012 and the Olympics, important though they are to the national mood.

As this trio of major events commands the media spotlight, licensed businesses are gearing up to host a range of alternative food and drink-related festivals across the country, creating a welcome opportunity to drive footfall in the coming months.
Whisky alone is set to be the focus of numerous events, many of which will be responsible for drawing tourists to Scotland from Europe and beyond.
In the Highlands, Fiddler’s in Drumnadrochit, three-time winner of the SLTN Malt Whisky Bar of the Year Award, is poised to host the third Loch Ness Whisky Festival on the weekend of May 11-12.
The event kicks off with a pre-festival dram at the bar, before ticket holders are taken by minibus to Temple Pier Harbour for a whisky cruise (price £20) aboard the RNLI rescue vessel.
The cruise will be followed by a tasting in the shadow of Urquhart Castle, with the evening concluding with a stovie supper back at Fiddler’s.
The bar’s co-owner Jon Beach, himself a former coastguard, told SLTN that all proceeds from the 20 tickets sold will go to the RNLI.
“There’s usually a fundraising aspect to the weekend,” Beach said.
“We have a running charity thing with our whisky club [Fiddler’s Whisky Parliament] and each time we raise £1000 we move on to another project.
“We’re almost halfway to the total for the Glen Urquhart Care Centre.”
The Fiddler’s festival also includes a BenRiach virtual distillery tour and tasting at Fiddler’s at 7pm on the Friday evening (tickets £20).
Doubling as the latest quarterly session of Fiddler’s Whisky Parliament, it will see BenRiach distillery manager Stewart Buchanan talk about the resurgence of the malt’s popularity.
Highlights the following day include the “christening” of Fiddler’s new whisky den – located in part of Beach’s home across the road – where the venue’s famous whisky room (known for its obscure memorabilia and rare bottlings) has been recreated; only 12 tickets are available, priced £20.
Saturday’s main event, Fiddler’s Festival of Whisky and Food (admission £15), will offer a range of tasting and educational opportunities, including ‘a taste of Japan’ with expert Tatsuya Minagawa; and the Loch Ness Whisky Festival Golden Pour, allowing guests to try a dram from five special bottles selected by the parliament.
Beach told SLTN the festival was largely designed to be a “showcase” for Fiddler’s, adding that extra effort is made to give the serious malt fans in its audience (some will be making the trip from mainland Europe), something “a bit special” to try.
He also said it’s a perk for members of the venue’s Whisky Parliament, who receive free entry to the Saturday afternoon’s activities as part of their £15 annual subscription.
The Fiddler’s event will be preceded by a whisky event on a grander scale.
The five-day Spirit of Speyside Festival, taking place from May 3-7, is now a key date on the international whisky calendar, drawing visitors from as far afield as Japan, Australia, Russia, South Africa, Canada and the US, as well as closer to home.
As many as 325 events are scheduled to take place (87 had sold out by the time SLTN went to press) offering enthusiasts exclusive tours, tastings in unusual locations like mountains, and whisky dinners.
And the local trade is set to profit, with tastings held in hotels and restaurants as well as a Roving Dinner in Grantown-on-Spey.
Taking place for the first time, the dinner will see consumers enjoy a three-course meal in three different venues – Garth Hotel for the starter, Grant Arms for the main course and Rosehall Guest House for dessert – with each course based on fine Scottish food and accompanied, naturally, by whisky. Guests will be ‘piped’ between venues and will conclude the evening in traditional Scots style with a ceilidh at the Royal British Legion.
Other events taking place locally include a four-course Glenfarclas dinner at the Craggan Mill restaurant, Grantown-on-Spey, and steak nights at the Mash Tun in Aberlour.
Spokeswoman Caroline Keith said the festival, which has been running for 13 years, “is only going to get bigger”, and confirmed to SLTN that plans are already being discussed for next year and 2014, when the tourism industry is due to get behind another Homecoming campaign.
Meanwhile, operators in the Hebrides are hoping to build business around a host of summer music festivals.
Neil Morrison, owner of Mull bar Macgochans, was one of five operators gearing up to stage gigs in the Mull Music Festival in Tobermory last weekend. Thirteen bands spanning Celtic, rock and traditional music were due to appear over three days from April 27-29.
Morrison, who is also involved with the Tiree Music Festival in June and Sonafest in Ardnamurchan the month after, said the event is “massive for the economy on Mull”.
“We’re lucky on Mull to have events at the start and end of the year [the Mull car rally takes place in October]; they provide a much-needed boost for the local economy,” he told SLTN.