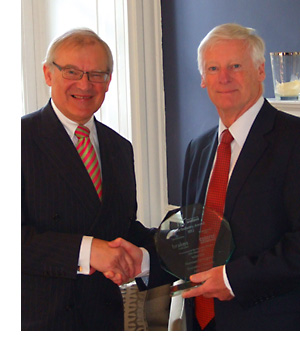 Norman Springford was presented with the award by HIT Scotland chairman Stephen Carter earlier this month.
Apex, which has four hotels in Edinburgh, one in Dundee and three in London, is owned and run by Norman and Dorothy Springford and their family.
David Cochrane, the charity’s chief executive, said the award recognises an individual who shows “dedication to raising standards and a passion for the industry that goes beyond their job description”.
“Norman is a highly-respected Scottish businessman who has achieved great things for our industry and Apex Hotels is doing fantastically well in such challenging times,” he said.
“There was an overwhelming amount of nominations and it was a unanimous decision from the judges.”
Collecting the award, Norman said: “We are absolutely delighted, but as everyone realises, this is very much a team award, and it is great to see them recognised for all the hard work that they have put in over the years.”
Apex Hotels was established in 1996 with the opening of the Apex International Hotel in Edinburgh’s Grassmarket. The company went on to open a further three hotels in the capital, one in Dundee and three in London – the most recent of which opened just off Fleet Street last month.