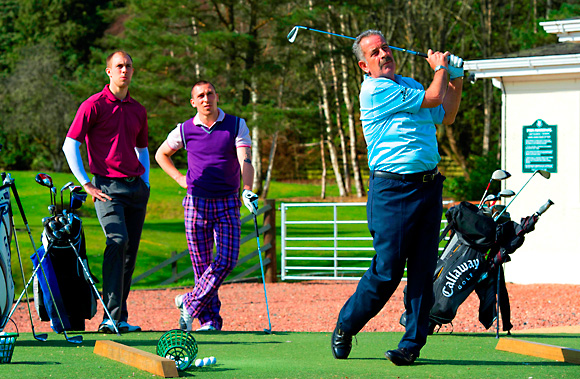 TWO Old Firm footballers teed up for a special golf lesson as part of a promotion for Caledonia Best, the new ale from Tennent Caledonian Breweries, earlier this month.

Celtic skipper Scott Brown and Rangers star Steven Whittaker feature in a new ‘instruction film’ which sees them receive a tutorial from Scottish golf legend Sam Torrance, who was unveiled as the brand ambassador for Caledonia Best last month.
The film was created to promote a new competition giving two people the chance to win a lesson with Torrance at the inaugural Caledonia Best Clubhouse Golf event at the PGA Centenary Course at Gleneagles in August.
“The competition heralds the start of an exciting year for the brand and we look forward to announcing a range of new trade and consumer initiatives over forthcoming months,” said sales MD John Gilligan.
The Torrance tie-up came as TCB launched a new beer, Tennent’s Original Export, for the off-trade.