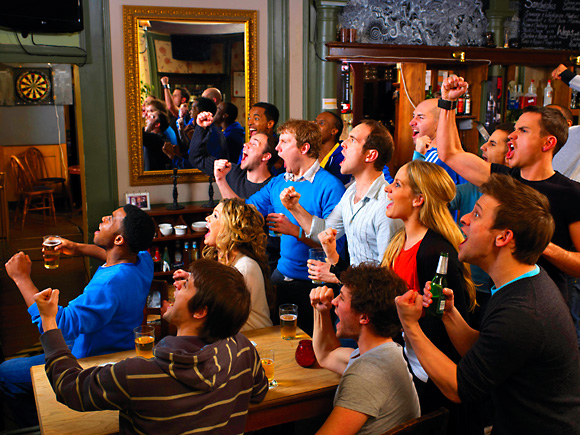 LIVE sport has become big business for pubs in recent years, and the next few months could see the biggest sport-related boost yet as the nation gears up for a ‘summer of sport’.

From the European Championships to Wimbledon and, of course, the Olympic and Paralympic Games, there will be plenty of excuses for the general public to head to their local.
In order to capitalise on these events, however, publicans will need to ensure that they have the right equipment and setup in their premises.
Fortunately, there’s a range of audio visual specialists the trade can turn to for advice on how to achieve the optimum set-up.
According to equipment supplier Casio Projectors, screen size is one of the most important factors in a quality AV system. Recent research from the company revealed that larger, crisper pictures are one of the key factors customers consider when choosing which pub to watch live sport in.
“With this in mind, I think we are going to see an incremental increase in sales to pubs and bars over the coming few months, part fuelled by the need to have top-end AV equipment in place to take full advantage of this incredible year of televised sport,” said Trusha Sharma, senior marketing executive for Casio Projectors.
Sharma said projectors are particularly suited to pubs, as they will always provide a larger viewable area than a TV.
“It’s also easy to be distracted by the technology,” she added.
“Don’t forget the importance of mounting equipment for your projector. A good professional job to help keep cables out of the way and properly connected is well worth the investment.”
AV equipment supplier Airwave Europe is also anticipating a sales boost in the approach to summer.
This certainly seemed to be the case in 2010 when, according to marketing executive Helen McCarren, the company installed 4000 new screens in pubs ahead of the World Cup.
Last year Airwave installed an additional 500 screens into Mitchells and Butlers pubs ahead of the royal wedding. And McCarren added that there has already been “high demand” for systems in the approach to the Olympics and European Championships.
Describing quality HD screens as “a basic necessity”, McCarren said: “Offering Sky with HD, 3D and large screens makes customers more ready to spend the extra money and make an event out of sports games by watching them in the pub rather than at home.”
In such a difficult economy it might be assumed that pubs would shy away from purchasing new equipment, however McCarren stressed that sales in the sector have held up well.
Neil Fleming of Glasgow-based equipment supplier Sims Automatics said although he didn’t expect the summer’s sporting events to create a huge surge in sales, the falling price of technology such as plasma and LCD televisions has encouraged many pubs to trade up in recent months.
“We’re finding that people are going for the larger plasmas because of the price nowadays, 50-inch and 60-inch plasmas as opposed to the average 42-inch you would see in a pub,” said Fleming.
As well as highlighting cheaper prices, Fleming said the quality of the equipment has improved considerably since the first introduction of high-definition kit, and that the trade in general has embraced its importance.
Yet while the price of the units has dipped in the last six years, Fleming maintained that renting remains a popular option for the pub trade.
As well as allowing publicans to trade up to newer or larger models, these agreements also mean that pubs can have faulty equipment immediately repaired or replaced – something more likely to happen in a bar than in a domestic setting.
“A public house is not the same as being at home, where your plasma or LCD is on for a short space of time,” said Fleming.
“In a pub it’s on all day – it can be on from ten or eleven in the morning until midnight, so the lifespan in a public house would be shorter. You can have one running out of warranty after one year and it [breaks], and if someone is renting that from us then we’ve got to go out there and change it.
“But it’s very difficult to say. We’ve seen them last in excess of five to six years.”