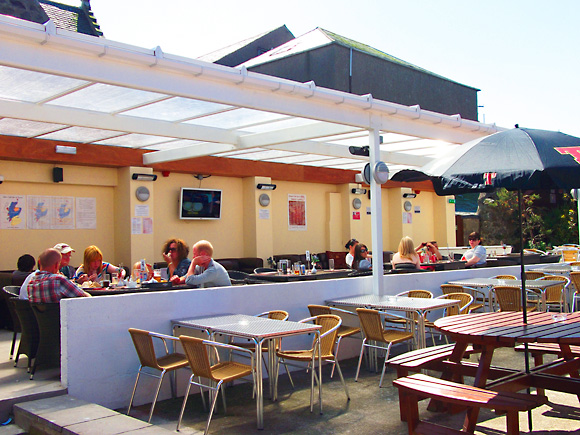 AN award-winning pub in Scotland’s north east is preparing for summer by investing heavily in its outdoors space.

Cheers Bar Café in Fraserburgh is gearing up to expand its multi award-winning area to offer locals and visitors an even greater level of comfort outside.
It’s all a far cry from when Dennis Forsyth took over the pub in 2005, when the property was badly in need of renovation – inside and out.
The outlet, which was bought out of receivership, has since been established by Forsyth as a thriving business in the fishing town (population 12,000), thanks largely to considerable investment from its owner.
“We have been a shining light in what has been a difficult economic climate for the area,” Forsyth told SLTN.
While the interior has benefited from extensive renovation in the last year – former owners’ accomodation has been converted into a tavern and staff training facility – it’s the venue’s outdoors area that has drawn the most attention.
Winner of the Imperial Tobacco Award for Best Smoking Facilities at the SLTN Awards 2011, the expansive area at the rear is currently split in two. One half operates as an open beer garden and the other is set up as a covered and heated area that boasts comfortable leather furniture, weather-proof TV screens and a pool table.
There is also a smaller third outside area, at the side of the pub, which also has a roof and a television set.
The versatility of these three areas was one of the key factors that impressed the judges of the SLTN Awards, according to Iain Watkins, UK communications manager at Imperial Tobacco.
“Everything about the outside area at Cheers Bar Café, from the comfortable furniture to the weather-proof televisions, is geared towards making the customer as comfortable outside as they are indoors,” Watkins said.
“A roof and several outdoor heaters keep customers warm and dry regardless of the Scottish weather, and adult smokers are further catered for with a range of tobacco products behind the bar.
“When it comes to smoking facilities Cheers Bar Café is best in class not only in the north east but throughout Scotland.”
And the outdoor facilities are set to become even more impressive.
New plans drawn up by Forsyth will see the current beer garden converted into a second covered area, with heaters, furniture and television screens all set to feature.
At the same time, the original covered area will be extended, with the addition of a raised platform for live entertainment.
Forsyth is also having an outside bar installed, complete with its own beer cellar to allow for the sale of draught products, and new female toilets built.
The operator said the project will essentially bring “the entire inside out”.

We have been a shining light in what has been a difficult climate for the area.

But to comply with planning rules, a two-metre gap must separate the two covered areas, with the space filled with circular benches and parasols.
And in line with a new focus on disability awareness, the entire outdoors area will also be made wheelchair-accessible with the installation of a new ramp.
“In the year of the Paralympics and loads of major outdoor events, like the European Championships, when beer gardens are going to be very popular, we’ll be able to cater for everybody and ensure that anyone requiring disabled access will be treated with the utmost respect and we’ll have the facilities for them,” Forsyth said.
Furthermore, the outside bar will double up as a function space for parties and events such as weddings.
A key strategy for the summer months will also be to position the pub as a family-friendly destination: Forsyth plans to make outdoor space smoke-free until 8pm.
“We’re still bearing in mind that people like to go outside and not have smoke in their faces, so we have our own rule, it’s not something they [the council] have asked us to do.
“We’ll just do that simply as a service to our existing customers. We’ll make it non-smoking till 8pm, so that kids don’t have to be running around with people smoking. I think that’s only fair.”
Representing a claimed £120,000 investment, the conversion of the outdoor space was scheduled to begin this week, though the pub was still awaiting the final go ahead from the licensing board as SLTN went to press.
It is Forsyth’s hope that the first stages of the project will be complete by the May Day bank holiday weekend, which is traditionally the pub’s busiest trading period of the year.
This year is expected to be no exception, with live entertainment that will make use of the pub’s considerable outside space. 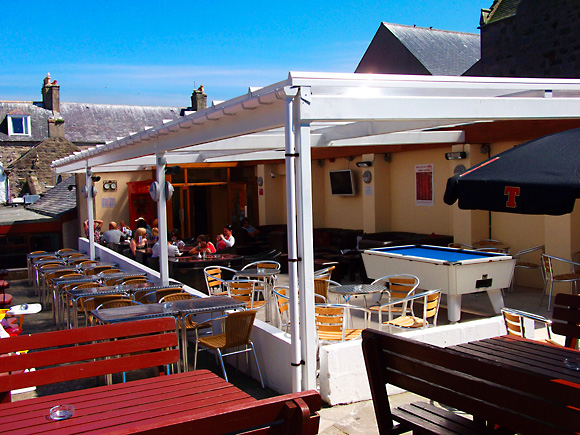 Images: The outdoors area at Cheers Bar Cafe is about to undergo significant refurbishment.