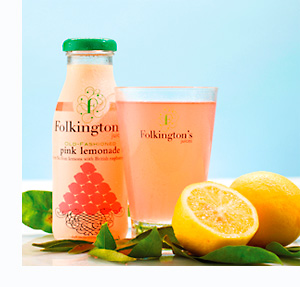 A BRITISH soft drinks company is focusing on provenance this year with the announcement that more of its fruit will be sourced from British farms.

Sussex-based Metro Drinks has added two new British juices to its Folkington’s range: British Cloudy Apple and British Cloudy Pear. Both juices are produced using fruit grown in England, with the apples sourced from farms in Sussex and Kent and the pears from farms in Gloucestershire, Worcestershire and Herefordshire.
The company is also stressing the provenance of the fruit in its other juices, which include Canadian-sourced cranberries and Spanish oranges.
Other new additions to the range include Sicilian Pink Lemonade, which is ‘pinkified’ using British raspberries.
“We have extended Folkington’s because our customers really appreciate the provenance behind the juices and the quality that it delivers,” said Paul Bendit, founder and managing director of Metro Drinks.
“So we have taken the opportunity to find some really wonderful British fruit with which to make our juices and to also go to growers in Sicily and Canada for our lemons and cranberries.
“We now not only offer a unique point of difference to the consumer but also provide them with information on the fruit varieties and where they are grown via our online platforms.”
The six-strong Folkington’s range is available in packs of 12 single serve 250ml bottles and is stocked by a number of wholesalers across the UK. Each bottle has a twelve-month shelf life.
As well as apple, pear and lemonade the range also includes tomato, cranberry and orange flavours.
Metro claims that all of the juices are 100% pure, not from concentrated juice and free from preservatives and additives.