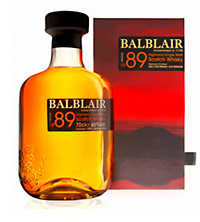 THE firm behind Highland single malt Balblair has launched the third and final release of the 1989 vintage.

As with the 2001 vintage, which was launched in November 2011, Balblair 1989 is non chill-filtered, naturally coloured and bottled at 46% ABV.
Matured in American oak ex-bourbon barrels, the whisky is said to provide “fruit and a rich spiciness on the palate, leading to a complex yet notably smooth finish”.
Distillery manager John MacDonald said the now ‘extinct’ second release of the 1989 vintage was many people’s favourite Balblair.
“I believe this variant – at a higher strength, uncoloured and non chill-filtered – is even better,” he said.
Andy Hannah, brand manager at parent company International Beverage Holdings (owner of Inver House Distillers) said: “Balblair has become established as a favourite of discerning whisky drinkers worldwide. As well as being the only distillery solely releasing vintage malts, the contemporary packaging design sets it apart.”
The final release of Balblair 1989, which has an RRP of £60, will focus on three key markets: the UK, France and Russia.