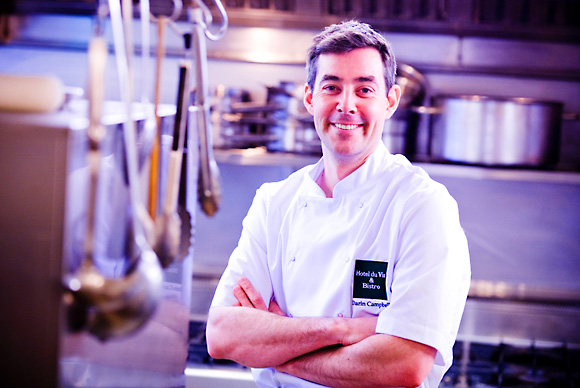 DARIN Campbell was introduced to the merits of fresh produce at an early age – now he’s using it to wow diners at one of Glasgow’s most prestigious hotels.

Having grown up on a farm outside Largs, some of Darin’s earliest memories involve fetching fresh milk for the family’s breakfasts and eating fresh beef and lamb.
After this crash course it’s perhaps unsurprising that he turned to a career in cooking.
After learning the basics in the kitchen of a local hotel, Darin set out to learn all that he could from some of the top names in the industry.
Renowned French chef Jean-Michel Gauffre was first, at Edinburgh’s Sheraton Grand, followed by spells working with Andrew Fairlie (at One Devonshire Gardens and, later, Gleneagles) and top London chefs Marcus Wareing and Eric Chavot.
It was last year, while Darin was head chef at the Fortingall Hotel in Perthshire, that Hotel du Vin approached him about returning to One Devonshire Gardens in Glasgow.
Describing the executive chef position at the hotel as a “dream job”, Darin jumped at the chance.
“It’s a very special place, Devonshire Gardens,” Darin told SLTN.
“It always has been. It’s very distinctive in style, in feel, in look. The people that work here are very passionate and very proud of it.”
As a business, One Devonshire Gardens had changed quite a bit between 2000, when Darin left the hotel as senior sous chef, and his return as executive chef last year.
Now part of the Hotel du Vin group, the hotel occupies all five town houses on the block (it occupied three in 2000), has a thriving weddings and events business, bistro restaurant and bar and 49 guest rooms. There are two kitchens in the hotel, employing a brigade of 13 chefs and five KPs.
It is, in Darin’s words, a “much bigger beast” than it was at the turn of the new century.
And yet pride in Scottish produce remains an integral part of the hotel’s offering.
The beef on the menu is all 100% Aberdeen Angus, sourced from a farm in Ayrshire, and a new vegetarian tasting menu has just been introduced featuring fresh, seasonal vegetables.
Local produce is, of course, also a subject close to Darin’s own heart. He describes his style of cooking as “modern French, but using all the best that Scotland has to offer”.
“Scotland has a tremendous amount to offer,” he said.
“We’ve got some of the best seafood in the world.
“We’ve got the best meats in the world – everything from venison to beef, lamb and chicken.
“You can see that there’s a lot more people out there going away from the larger, mass-produced companies. Which is great from my point of view.”
In fact, Darin claims to have noticed a shift across the trade as a whole since he started out in the early ‘90s, with more Scottish restaurants now working with local producers.
“I think people are catching on to how good the produce is, and using more of it, so more of it is staying in the country and when people [visit Scotland] they’re experiencing a lot more authentic Scottish food,” he said.
Perceptions of the industry itself have also changed, said Darin, with more young people now considering a career in the kitchen.
Thanks in part to the media and cooking programmes, Darin reckons the perception of the chef profession is starting to shift closer to how it is seen on the continent.
However, he also stressed that aspiring chefs need to know what they are letting themselves in for.
“It’s a great career. It’s been very good for myself,” said Darin.
“But it is hard, with long hours, and you are under a lot of pressure with, a lot of times, not a great deal of thanks.
“You hear a lot more negative comments [than positive], but if you’re willing to do that you can go a long, long way.”