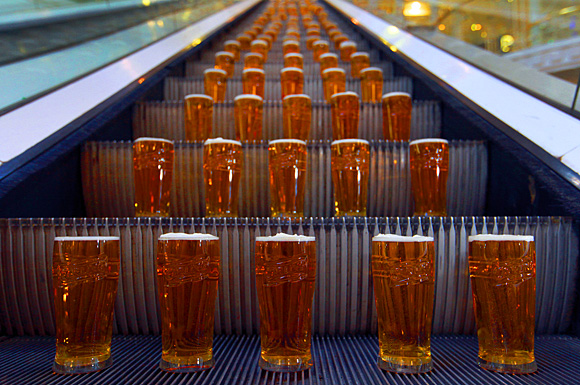 BY the time you read this, you will more than likely be faced with the prospect of adding up to 10p to the price you charge for a pint.

Just a month after most of the major brewers upped their wholesale prices, yesterday’s Budget was expected to see the controversial duty escalator bring a further 2% above inflation rise in alcohol tax.
It’s an increase that all corners of the beer and pub industry say they could do without.
Speaking ahead of the Budget, the British Beer and Pub Association (BBPA) claimed this year’s duty hike, which was expected to top 5%, would take the total rise in beer tax to 42% since the escalator was brought in by the Labour government at Westminster in 2008. The trade group said duty and VAT have now reached £1.05 per pint – a level it described as “totally unsustainable”.
It’s a view shared by those on both sides of the bar.
Phil Whitehead, managing director of Molson Coors Scotland, said successive duty hikes are damaging both the brewing and pub industries.
“These rises in tax do little to encourage consumers to opt for lower strength drinks, such as beer, and they punish pubs and brewing – two brilliant domestic success stories with rich heritage,” he said.
“Ultimately, further tax hikes will push more pubs into difficulties, putting under threat the 71,000 Scottish jobs that are reliant on the beer and pub industries.
“This is not just problematic from a jobs point of view, however, but also affects our aims to promote responsible drinking.
“Publicans, through schemes like Best Bar None, can play a hugely important role in helping ensure that consumers don’t overindulge and, with the right support from government, could play an even bigger part.”
Other brewers also backed the BBPA’s pre-Budget calls for the government to freeze the duty on beer.
“As identified by the BBPA, the beer and pub industry provides employment to over a million people and this includes 300,000 18 to 24 year olds, whose livelihoods depend on this sector for employment,” said Carlsberg UK’s marketing and strategy director Darran Britton.
John Gilligan, sales managing director at Tennent Caledonian Breweries, said another hike in beer duty could adversely affect the pub trade.
“Not only do many people depend upon the hospitality sector for their jobs, but we also believe the local pub is a safe and friendly environment in which to consume alcohol,” he said.
“We would not support anything that puts local pubs at further risk in this difficult economic environment.”
And at Innis & Gunn, national account manager Jeremy Houston added: “An ailing economy compounded by successive above-inflation alcohol duty hikes and annual wholesale price increases means that draught beer volumes remain under pressure.”
Opposition to further duty hikes is shared by those at the coalface.
Frank Murphy, manager of The Pot Still in Glasgow, said although successive duty hikes have not affected sales in the bar, they could have an impact on some craft beers.
“It’s the same thing as people saying ‘I’ll stop smoking when it goes up to £4, £5, £6 a packet’,” he said.
“There is a bit of attrition on it, but people still want to drink what they want to drink.
“The extra tax on beers over 7.5% is a shame. I can understand why they want to do it – they’re targeting Super lagers and Special Brew – but they are also hitting more artisan beers.
“It’s just one of those things we’ll have to deal with but it might stifle creativity at the stronger end of the market.”

Katie Ritchie, assistant manager at the Maclay Inns-owned Clockwork Beer Company on Glasgow’s south side, said while beer sales are strong at the pub, others seem to be suffering.
“I don’t think the industry is taking it [duty increases] in its stride at all,” she said. “I think there’s a lot of pubs that aren’t doing very well at all out of the whole situation.”
Gary Middleton, bar supervisor at The Birds and The Bees in Stirling, expressed a similar view.
“We’re fortunate here in that we have a great restaurant trade as well, but the amount of places that are trading only as pubs and that are closing down every week is frightening,” he said.
“The last thing you want to have to do in that situation is tell people you’re putting the beer up as well, when you’re struggling to get customers in the door in the first place.”
One thing pubs can control, though, is the quality of beer they serve and it’s an area of particular focus for brewers like Heineken.
“We believe it is vital that, as a brewer and supplier of leading beer and cider brands, we continue to invest in the beer category in terms of marketing programmes that empower us to support licensees and the category as a whole,” explained John Gemmell, trading director of Heineken North.