Matthew Clark and Forth Wines buoyant after capital tastings 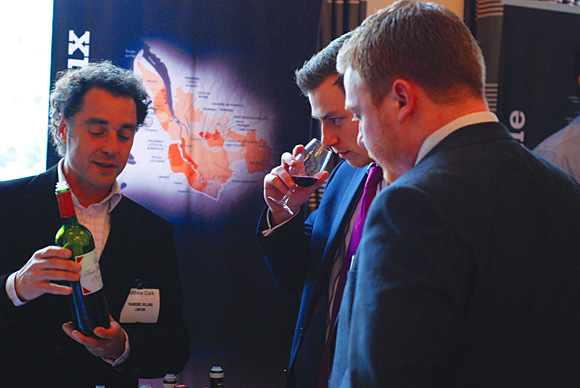 DRINKS suppliers Matthew Clark and Forth Wines were last week toasting the success of annual tasting events in the capital, where the wholesalers unveiled their respective wine lists for 2012.

Matthew Clark showcased 390 wines – 170 new – to 400 trade customers at The Balmoral in Edinburgh on March 14. It was followed the next day by Forth Wines’ annual portfolio tasting at the Signet Library, where a capacity audience of 350 met to taste and talk about the latest list from the Milnathort-based supplier.
Frances Bentley, wine development specialist at Matthew Clark, said there’s a “bigger focus on the regionality of wine” and a higher proportion of premium wines in this year’s offer, which spans 1250 bins.
“We’ve been looking more at different parts of the new world, New Zealand being a particularly powerful case,” she told SLTN. “We’ve taken on wines from Waiheke Island and Central Otago to broaden the list and make sure we’re offering a complex and interesting list. Rather than stocking the same things or repeating it over and over again, we’ve looked at interesting parts of these countries that are becoming more popular.
“Waiheke Island is very good for Sauvignon – it’s very good for the aromatics because it’s that bit further north. You also get a very good Syrah – one of the key wines on our list for this year will be the Man O War Dreadnought Syrah from Waiheke Island, which we’ve taken on the agency for and is now exclusive to us.”
Premium wine director Paul Brown said the focus on more premium wines was a “natural” progression for customers who had success with its entry level and branded wines and as “the market has moved into restaurants and hotels”.
Meanwhile, Forth Wines’ boss George Thomson was in a buoyant mood following his company’s tasting. “It was an outstanding success,” he told SLTN. “Customers responded well to the established wines and to the new ones on the list.
“There’s not been a huge change, to be honest – last year was a more significant change, this year the changes were more subtle. We now have things on the list we wanted to include last year, but didn’t quite make it.”
Away from the list, Thomson said the firm was receiving positive feedback to a trial of half-litre carafes in two accounts, which he said was enabling operators to sell higher-quality wine at a healthy cash margin.
Looking ahead, he said he was “hopeful” that better trading conditions were on the way. “There’s no doubt times are tough, no question about it,” he said. ‘The really good operators are working harder than ever to build in value and encourage people to trade up, which is difficult in this climate.”

Image: Visitors took their time to enjoy the wines at The Balmoral, MC’s Brown said.