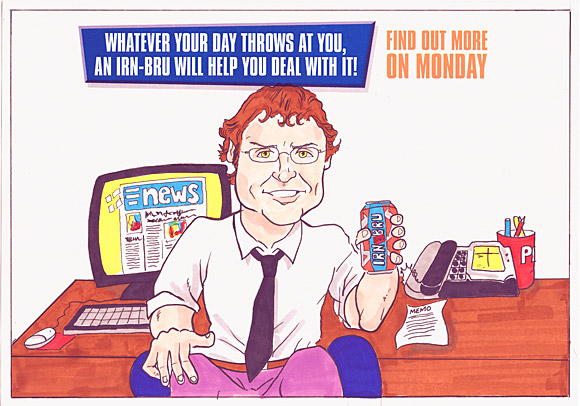 IT’S official. From March 28, Irn-Bru will no longer be Phenomenal.

AG Barr is preparing to unleash a new advertising theme for the iconic Scottish soft drink that will see it return to TV screens with three new ads, supported by digital activity, point of sale material for stockists and promotions in wholesalers.
The launch maintains a tradition of Barr introducing new advertising concepts for Irn-Bru every seven or eight years – past themes have included Scotland’s Other National Drink, The Soft Drink for Hard Men and Made in Scotland from Girders, as well as the most recent Phenomenal.
Jonathan Kemp, commercial director at AG Barr, was unable to reveal specific details of the new campaign.
But he told SLTN it will be broadly based on how consuming Irn-Bru can equip drinkers for the travails of everyday life.
“In 2004, we had the Phenomenal launch and for the last seven or eight years all the ads have sat under that banner,” Kemp explained.
“On March 28 we will launch a new campaign which will move us away from Phenomenal into a new position all about what Irn-Bru can do to make life look a whole lot brighter.
“The concept is around ‘nothing beats your Irn-Bru’.
“What you will see is probably more typical Irn-Bru advertising – we’re actually going to make three adverts to launch, which is quite a lot, but we really want to get this across.
“And it’s going to be maverick, it’s going to be Scottish and hopefully it’s going to make people laugh.
“What it will say is that an Irn-Bru will brighten up your day and give you the ability to cope.
“It will be a big campaign, we will be putting heavyweight investment behind it and it will be here to stay for a long period of time.
“We’re very hopeful it will increase sales of the brand in Scotland.”
Given its ubiquity in Scotland, it might be assumed that the potential for Irn-Bru to grow sales further in its homeland is limited.
But Kemp insisted there are still plenty of sales to unlock – especially on Sugarfree as many outlets currently stock Original only.
Original currently accounts for 70% of overall Irn-Bru sales but Kemp said Sugarfree has the potential to ultimately account for 50% of the total amount.
“It is a big opportunity, because people who drink Sugarfree tend to drink more as well, because it’s guilt-free,” he said.
“For me, any pub that says ‘I only need to carry regular Irn-Bru’ is missing a bit of a trick, because at least three out of every ten Irn-Bru consumers want Sugarfree and that’s only going to grow.
“People will perhaps not go back to an outlet because it doesn’t stock Sugarfree Irn-Bru – that’s the level of loyalty people have to it in Scotland.”
The new ads will be screened in Scotland and in certain TV regions the north of England, but not the south. Kemp said the brand was making good inroads into the north of England after a “concerted focus for the past four or five years” that has seen it sponsor the Rugby Football League and its coverage on Sky Sports.

(Image: AG Barr reckons even SLTN editor Scott Wright could do with an Irn-Bru to make it through the day.)