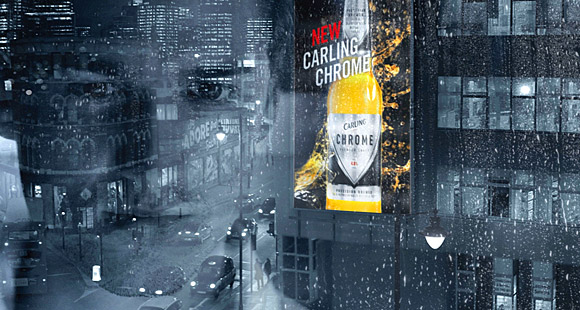 MOLSON Coors is targeting a specific group of young adult drinkers with a major new marketing campaign for Carling Chrome.

The global brewer launched the premium bottled beer last year and so far it’s been a predominantly off-trade product.
However, the new campaign – which includes the brand’s first foray into television advertising – coincides with an increased focus on the on-trade.
Speaking to SLTN Robert Hollis, senior brand manager at Molson Coors, described the target audience for Carling Chrome as “social explorers” – a group of outgoing, stylish male and female consumers in their twenties and early thirties.
The ad, titled ‘anticipation’, features a young couple getting ready for a night out. As they prepare the anticipation of a bottle of Carling Chrome builds, until they meet their friends in a bar and are able to enjoy the beer.
In keeping with the brand name and the target market, the ad is shot in stylish black and white and accompanied by the classic T.Rex track Get It On.
“I think [the ad] is very much focused towards what the brand is, the occasion it fits and also the type of audience that we’re targeting.
“And really it’s very orientated towards communicating the stylish, sophisticated nature of the product – so the way the couple are dressed, the implication of them going out to a nice location.
“But it’s also trying to land the functional benefits of the product – the taste of it, the refreshing nature of the product. And very much the fact that it’s a brand with unisex appeal.”
Hollis said that 4.8% ABV Chrome has been designed specifically to appeal to men and women with a lighter, crisper taste than other premium bottled beers.
“It’s not a beer that’s solely focused towards males, which is where a lot of beer brands have been historically,” he said.
“A number of the newer premium brands do have that unisex appeal, so it’s very important to focus on.”
In recent years the young adult market has diversified into a number of drinks categories, and Hollis said part of Molson Coors’ ambition with Chrome is to attract drinkers from categories such as cider and spirits, which have proven particularly popular with young women.
Backed by a claimed media spend of £7m, the new ad launched last month on television, cinema, video on-demand, print and outdoor, and continues throughout March.
Molson Coors said it expects 90% of all 18-34 year olds to see the campaign, which will expand into digital media later in the year, by the end of this month.
“Commoditisation is a problem in any marketplace, and the beer and long alcoholic drinks industry is particularly competitive,” Hollis said.
“And that’s why we’re investing so much behind the Carling brand in particular and sub-brands like Carling Chrome, so that we create those compelling reasons to choose a brand and to choose a category – offering something new to re-energise it, if you like.”