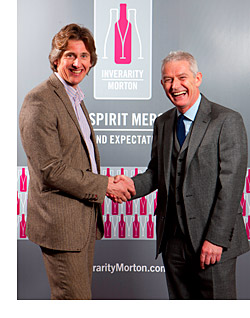 A NEW force in Scottish drinks wholesaling was born last week, bringing together two of the country’s most established, family-owned suppliers.

Inverarity Morton is the result of last summer’s merger between composite wholesaler William Morton and Inverarity Vaults, the wine merchant.
Glasgow-based Morton, part of A Bulloch (Agencies), acquired the fast-growing Inverarity for an undisclosed sum in July. Initially, the two companies continued to run separately, allowing bosses to assess their strengths and how they could be merged to best effect.
And their blueprint for the future was unveiled at wine tastings in Edinburgh and Inverness last week, where details of investment worth £400,000 in the business were disclosed, alongside a new sales structure and a new 1200-bin wine list.
MD Stephen Russell said the investment had been made in new back office, stock management and delivery software systems, new delivery vehicles and a new corporate identity, as well as iPads for sales staff – giving them live access to prices, stock levels and customer records.
The enlarged company, which has a combined turnover of more than £50 million, will operate from Morton’s head office and depot on Glasgow’s south side, meaning the closure of Inverarity’s Biggar warehouse base. But the move is said to have resulted in only two redundancies from a combined workforce of 150.
The sales operation, headed by sales director Donald Campbell, is effectively split into two, one focused largely on wine customers and the other primarily serving Morton’s traditional customer base of pub, club and young adult venues.
Hamish Martin, who built Inverarity into a business that turned over more than £8.2 million in its last financial year, will remain a key figure going forward. As well as sitting on the Inverarity Morton board, he will take charge of the One to One retail store in Glasgow and certain key accounts.
“The next priority is to make sure customers get the same level of service they’ve had,” Russell said. “It will be no surprise if our competitors try to destabilise us. That’s why we have taken the time to make sure we got the wine list right and to demonstrate that Inverarity Morton does produce an enhanced service.”
• Donald Campbell said the turnouts at the Inverarity Morton tastings – 260 customers in Edinburgh and 120 in Inverness – were the “biggest I’ve seen in 30 years in the trade”.