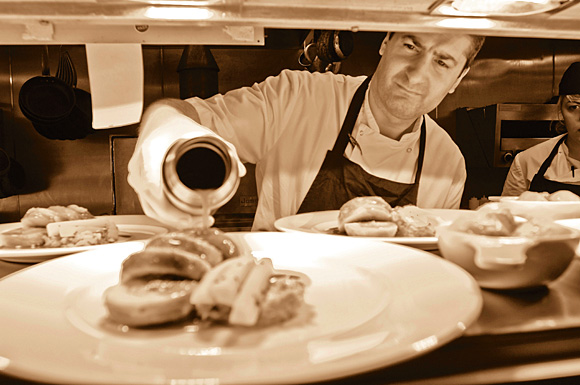 GLASGOW’S Blythswood Square hotel will be the venue next month when eight leading UK chefs gather to cook for charity Hospitality Action.

The dinner is one of a series the ‘Great 8’ group of chefs are hosting which aim to provide a networking and dining opportunity for guests and participants as well as a chance to raise cash for the cause.
Hospitality Action, a UK-wide body whose high-profile supporters include Marco Pierre White and Heston Blumenthal, raises funds for current and former staff in the industry who have fallen on hard times.
Counselling and financial advice are among the services offered as well as financial grants.
Blythswood head chef Derek Donaldson explained the Great 8 evolved through www.visionarydining.com – a training and networking site for professional chefs – and became involved after attending some of its courses south of the border.
“They’ve taken eight of the top chefs from around the UK and got them together to try and raise some money for Hospitality Action,” he told SLTN.
“Each one of the eight chefs will host a dinner and use their contacts from their hotel or restaurant to sell tickets.
“It will be an eight-course dinner and all the other chefs will come to the host’s hotel and do a course, with a percentage going to charity. There will also be raffle prizes on the night and sponsorship for the wine, bits and pieces like that.
“These kind of events don’t happen all that often in Glasgow so it will be quite an unusual event.”
Donaldson was unable to say how much the organisers aimed to raise, explaining that the event will have no more than 70 covers, as tasting dinners for fine dining food tend to be small in nature. “But on the night we will be trying to raise a few thousand pounds for the charity,” he said.
Donaldson’s contribution to the eight-course tasting menu at the dinner on March 19 will be Kallin crab lasagne with langoustine frite.
He said the culinary challenge and the opportunity to raise the profile of the Blythswood were among the main attractions for getting involved.
“We don’t make any money from it – it’s purely a charity event – but what it does do is make the hospitality industry aware of what we’re trying to do at the Blythswood hotel and that we’re getting involved with other UK chefs.
“I believe we have to be more connected with what’s going on down south.
“If these good chefs are coming up that’s eight different dishes that you’re seeing.”
Tickets for the Blythswood Great 8 dinner cost £125 per person for dinner only, rising to £250 per person and £385 per couple for dinner, breakfast and overnight stay,