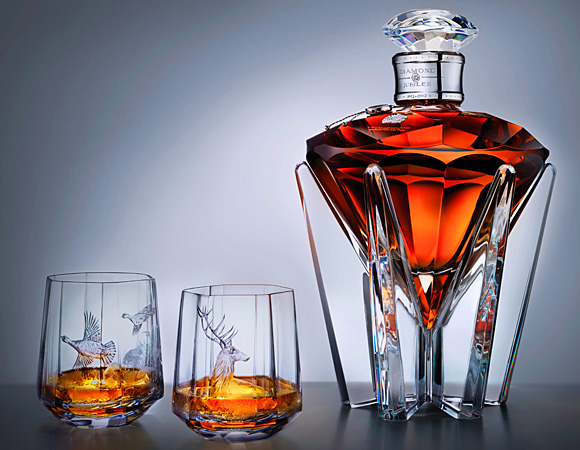 WHISKY enthusiasts with £100,000 to spare could toast the Queen’s Jubilee with a whisky that’s been maturing since the start of her reign.

Diamond Jubilee by John Walker & Sons is a blend of rare malt and grain whiskies distilled in, and maturing since, 1952 – the year Queen Elizabeth II acceded to the throne.
The filling of the Queen’s decanter was overseen by David Gates, grantee of John Walker & Sons’ royal warrant, at Royal Lochnagar Distillery on February 6 – precisely 60 years since the Queen came to the throne.
A further 60 editions of the whisky have been released for sale around the world with a price tag of £100,000 each; profits will be donated to the Queen Elizabeth Scholarship Trust.
Diamond Jubilee by John Walker & Sons, which was married in casks made from oak from the Queen’s Sandringham Estate, comes in a diamond-shaped Baccarat crystal decanter with a pair of lead Cumbria Crystal glasses and a commemorative hand-bound artefact book, all presented in a wooden chest which incorporates oak from the Sandringham Estate.
Jim Beveridge, master blender at Diageo-owned John Walker & Sons said creating the Jubilee whisky with his apprentice Matthew Crow had been a “once-in-a-lifetime privilege”.
“Along with master cooper David Taylor, who I have worked alongside for more than 30 years, and all those at John Walker & Sons, I feel an immense sense of pride to be involved in this project,” he said.
“An extraordinary amount of care and attention has gone into every stage of crafting this Scotch whisky and there has been a great sense of excitement building towards today, when the full character and flavours of Diamond Jubilee by John Walker & Sons will be revealed for the first time.”
Meanwhile, Elgin-based whisky merchant and distiller Gordon & MacPhail has launched a 60 year old single malt to commemorate the Queen’s Diamond Jubilee.
Just 85 bottles of Glen Grant 60 years old, which was distilled on February 2 1952, have been released with a price tag of £8000 a bottle.
The single malt is presented in a pyramid-shaped crystal decanter with a diamond-shaped stopper; the decanter comes in a hand-crafted box made of Scottish elm, lined with purple Harris tweed fabric.
“With whisky of this quality and rarity – each bottle comes with a certificate of authenticity – we expect considerable interest, not just in the UK, but from the international marketplace, where recent export figures have shown we have an avid consumer following,” said Michael Urquhart, joint managing director of Gordon & MacPhail.
“In producing the packaging for this remarkable single malt we worked with Scottish craftsmen, allowing us to showcase some of the finest talent in the country.”