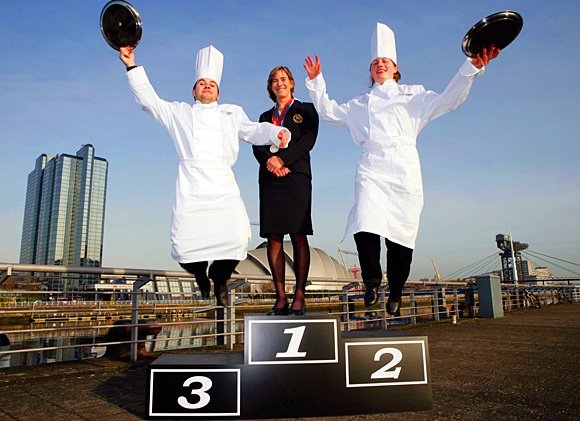 MORE than 100 students and young employees of the hospitality industry are looking forward to coveted workplace experiences thanks to the annual scholarship scheme run by charity HIT Scotland.
And two are hoping to take their careers on to the next level by embarking on scholarships offered exclusively by HIT in partnership with SLTN.
The scholarships were presented at the climax of HIT Scotland’s eighth Emerging Talent Conference, which took place at the Glasgow Science Centre on February 7.
The event, which attracted 300 young hospitality students and employees, aimed to raise standards and aspirations across the industry.
Delegates attended workshops on the day hosted by such prominent industry figures as chef Willie Pike and Shirley Spear, owner of The Three Chimneys hotel and restaurant on Skye, and heard keynote speeches from Olympic rower Katherine Grainger, marketing guru Peter Fisk, and Captain Nick Bates, former captain of cruise liner the QM2.
The conference concluded with the scholarship presentation, which saw 106 individuals selected for placements in hotels, educational establishments and Michelin star restaurants at home and abroad, including the six-star Jumeirah resort in Dubai and the prestigious Ecole Hoteliere Lausanne in Switzerland.
Two scholarships were presented in association with SLTN for a third year.
Andrew Scott, owner of Milnathort-based Scott Hospitality Services, was presented with one of the inaugural entrepreneur scholarships, and is set to tap into the experience of Jillian MacLean, owner of London-based pub group Drake & Morgan. Simon Garrow, assistant manager of boutique hotel Tigerlily in Edinburgh, will embark on the revenue scholarship with RevExcel, a specialist in helping businesses enhance their commercial success.
Scott, who established his business in June 2003 and provides catering facilities to venues like Knockhill racing circuit and Balgonie Castle, and also owns the Heaven Scent coffee shop in Milnathort, said he was “over the moon” to have been awarded his scholarship.
He said he was looking forward to quizzing Maclean on how she built her portfolio of “wonderful properties” – and for advice on raising finance to acquire hospitality premises.
“When I look at her website I just think, how did you get from where I am to what you’ve got?” he told SLTN.
“I don’t mean that from a selfish perspective – but to just employ more people, give something back and just have a bigger all-round company.
“I think funding is a huge issue and that’s one of the reasons I’m so excited about Drake & Morgan – how did Jillian MacLean do it?
“How did she go from one to two, from two to three and from three to four [units]? Where does the money come from, when do you take the gamble, how do you get finance?”
HIT Scotland chief executive David Cochrane told SLTN the organiser had received “excellent feedback” following the event, stating that it “fulfilled what we set out to do”.
Cochrane also said the scholarships were part of the solution to the country’s economic woes, suggesting that the experiences offered a boost both to the individuals and the businesses they work for.