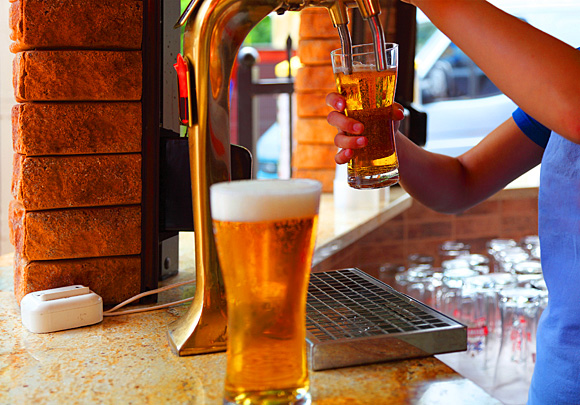 IT’S never been so important for operators to get the basics right when it comes to serving beer.

That was the message from the country’s biggest brewers last week, after new figures from the BBPA showed the volume of beer sold in the UK’s pubs, clubs and hotels continued to slide last year.
The drop of 3.4% was the slowest decline since 2004, but the trade group said the figure still equates to 139 million fewer pints.
Factors such as pub closures and above inflation beer tax increases – another of which is due next month – were cited as contributing to the drop in sales, as well as a reduction in consumer spending.

Getting the serve right is such an important element of drinking in a pub so we’re helping pubs get it right.

At macro level, the big beer firms back the BBPA’s calls to the UK government to ditch plans to put duty up above the rate in inflation in March.
But they insist there’s more individual operators can do to influence sales on the ground than simply holding out for a tax breather.
“Getting the serve right is such an important element of drinking in a pub so we’re providing support so that pubs get it spot on every time,” said Alisdair Hamilton, director of sales for Molson Coors Scotland.
“We also provide advice on cellar management, as well as how to serve the perfect pint as this is crucial to not only getting the taste right but managing profitability.
“Finally, we are investing in helping people get excited about beer again and back into their local.”
Heineken’s John Gemmell said getting beer quality right can also increase consumer loyalty.
“Rather than being about a ‘quick hit’, Heineken research shows that beer drinkers are placing more and more importance on the experience of the drink,” he said.
“Getting the basics right is incredibly important for bars, pubs and clubs to remember.
“From the serve, in a quality branded glass, to using branded accessories such as staff uniforms, to ensuring the drink is properly chilled, every seemingly little thing counts towards a high quality and enjoyable experience for the beer drinker.”
The commitment to quality was echoed by John Gilligan, sales managing director at Tennent Caledonian Breweries, who said the brewer is investing “significantly” in bar staff through its Tennent’s Training Academy.
“We invest in quality constantly,” he said
“It’s the priority for Tennent Caledonian, through investment resource, equipment and capital spend – investment we are making despite our below inflation price rise announced for this year.
“Quality is what consumers want and that’s what we constantly aim to give them.”
Offering different styles of beer is seen as another important way of boosting sales.
Lucy Jordan, director of customer marketing at Miller Brands, advised a ‘less is more’ approach when it comes to stocking decisions, claiming that consumers, on average, look at five or six brands before deciding what to order.
“It is really important to offer consumers a range of different choices instead of brands that play similar roles,” she said.
“We suggest that outlets offer brands from as many different groupings as relevant in order to give consumers variety and boost beer sales.
“By offering consumers a wide range of products, we see a real opportunity for retailers to maximise profits as they encourage their customers to trade up to a premium lager.”

It is important to offer a range of different choices instead of brands that play similar roles.

Meanwhile, Wells and Young’s marketing director Chris Lewis said ales have a “vital role” to play in the overall beer market.
“There is no doubt that the industry continues to face difficult times,” he said.
“However, with the acquisition of McEwan’s and Younger’s we have shown our belief that there is a bright future ahead for licensees who can promote the very best that Scottish pubs have to offer.
“There is a terrific opportunity to utilise our expertise in cask to boost this [our brands’] performance, and the current enthusiasm in Scotland for craft beer can only help with our efforts.”