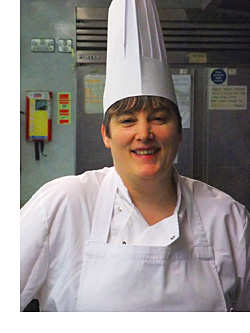 WHEN Karen Allan started waitressing at a hotel in the north east in the mid 1980s, she could hardly have known that it was the beginning of a career that would span more than 25 years.

Karen started working at the Ban-Car Hotel in 1986 and, upon leaving school, was offered additional hours working in the hotel’s kitchen – something she came to enjoy more than waiting on tables. This led to a YTS (youth training scheme) that covered the basics of catering and hotel management.
At the time the hotel was owned by the Thompson husband and wife team, with Mrs Thompson in control of the kitchen. It was in watching the chef at work that Karen really learned the ropes.
“You were better trained at your work,” Karen told SLTN.
“You learned a lot more than at college, because at college it was a different style (of food) that you weren’t doing at your work.”
The Thompsons ran the hotel until the early 1990s, after which it changed hands several times until eventually being taken over by the Gibbins family in the late 1990s.
In 1999 David Gibbins and his wife Tina took over from David’s father and Karen was appointed head chef.
Since then the hotel has been extended and the business has grown into a thriving wedding and events venue, as well as a local hotel and pub that caters for 200 covers every Sunday.
Co-owner Tina Gibbins said Karen’s presence has been crucial to the business’s growth.
“We’ve 27 weddings this year, and with Karen’s experience in the kitchen I can relax and just look after the wedding people and the guests and the service and that side of things, knowing full well that the kitchen is being looked after,” she said.
“She is a great asset to the hotel and to (the north east).”
And with 25 years under her belt, Karen isn’t looking to move on any time soon.
“The people have been nice to work for, it’s a nice area, and you get a lot of comments about the good food. It’s just a great area to work in,” she said.