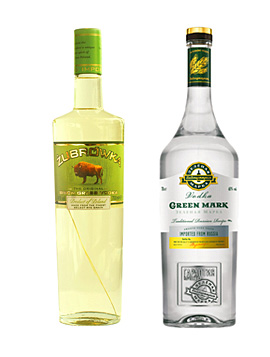 IT was all change in the vodka market late last month, with Polish brand Zubrowka moving to a new UK home and news of a top Russian vodka coming to bars in Scotland.

Marblehead Brand Development confirmed its association with Zubrowka bison grass vodka will come to a close on July 1, after a 13-year relationship which saw it build Zubrowka into a 25,000 case brand.
The distribution rights for what is claimed to be the UK’s biggest flavoured vodka will move to William Grant-owned First Drinks in the summer.
First Drinks, which until last year distributed Russian Standard in the UK (the rights were handed to Whyte & Mackay on January 1) announced the news as it confirmed it would also be bringing Green Mark, said to be one of Russia’s best-selling international brands, to the UK.
The brands are both the property of Polish drinks company Central European Distribution Corporation (CEDC), one of the world’s largest producers of vodka. William Grant & Sons has an existing relationship with the company, which distributes the William Grant portfolio in the Polish and Hungarian markets.
In addition to the Zubrowka and Green Mark brands, First Drinks will also distribute premium Russian vodka Kauffman from the first quarter of 2012 and assume control of Zubrowka from the third.
“The new vodkas are an excellent fit within our existing portfolio,” said First Drinks managing director Chris Mason.
“We have a strong track record of building premium brands and have big ambitions for 2012 to be in the position to offer our customers the most desired portfolio of authentic vodka brands of any UK distributor.”
Zubrowka derives its flavour from ‘bison grass’, a plant found in the north east of Poland, and is sold in more than 50 countries around the world. In 2010, around one million nine-litre cases were said to have been sold globally.
Green Mark, meanwhile, is claimed to have annual sales of around ten million nine-litre cases worldwide.
Announcing the distribution deal William Carey, president and CEO of CEDC, called First Drinks “the strongest distributor in the UK”.
“We believe First Drinks Brands will contribute to the further expansion of Green Mark which, as an authentic, high quality vodka from Russia, has great sales potential in the UK, where vodka is the largest spirits category,” he said.
“We have been very successful in expanding Green Mark’s export in 2011 and we will continue to build this brand’s international presence. We also look forward to strengthening the position of Zubrowka, which is our key export brand and has already won recognition in the UK market.”
Marblehead said the move will allow it to focus more on building sales of the “fast-growing” Kraken spiced rum as well as its portfolio of wholly owned brands, which include Davna Czeri vodka and Skipper rum.
In a statement from the company, business development director Dave Steward said it had been “a pleasure and a privilege” working with CEDC and the Zubrowka brand.
He added: “We wish Zubrowka and CEDC all the best for the future.”
In addition to Zubrowka, Green Mark and Kauffman, CEDC’s portfolio includes vodka brands Bols, Soplica and Parliament and the company is responsible for importing a wide range of drinks brands to Poland, Russia and Hungary.