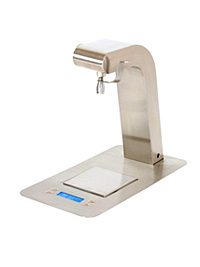 Brew bars are the latest coffee trend to arrive in coffee shops and leading European manufacturer of filter coffee brewers and water boilers, Marco Beverage Systems, is recreating one on its stand at Hotelympia [S3014].

Brew bars feature the individual cup by cup brewing of coffee – usually single estate and originals – using a variety of different brewing methods, such as cafetières, Haribo, Chemex, Aeropress or Hario dripper. Baristas are being invited to the stand to try out the different brew methods and to see for themselves the versatility of Marco undercounter and countertop water boilers including the iconic Über boiler itself.
Although quite diverse, these different ways of brewing coffee have at least one thing in common – the variable temperature of the water required to brew them optimally. With Marco’s specialist Über boiler, water temperature can be strictly controlled on a cup by cup basis. It also incorporates an integral weigh scale so that the correct quantity of coffee can be measured.
www.marco-bev.co.uk 01933 666488