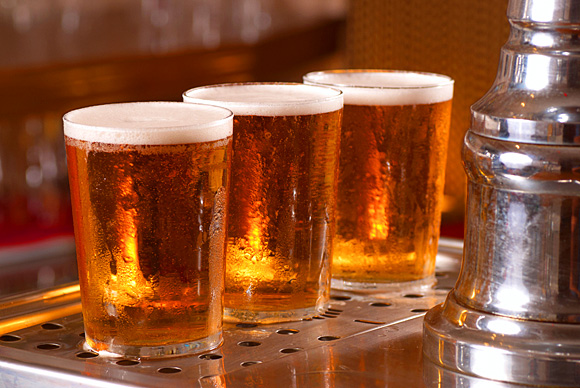 THE new year was only days old when, in keeping with tradition, pubs were told they were going to have to pay a wee bit more for some of the country’s biggest beer brands.

Molson Coors, Heineken and Carlsberg added an average of 7p a pint to the wholesale price of their brands, while Tennent Caledonian put through a more modest rise, the equivalent of 3.4p a pint at wholesale level. Belhaven, meanwhile, has still to disclose its plans.
In better times, operators might think little about adding a few pence to the price of point to maintain margins.
But in this age of austerity it’s much more of a consideration, as several operators said when contacted by SLTN last week.
“We’ve not passed the cost on to our customers yet,” said Orkney operator Karen Crichton, who runs The Shore Hotel in Kirkwall and The Ferry Inn in Stromness with husband Gareth.
“We’re bearing the extra cost ourselves, as our customers are sensitive to price at the moment.
“At this point in time, it’s local people who are coming out and we want to do everything we can to keep them coming out. In order to do that, we’re happy to keep prices the same over the winter period, then come the summer we’ll review prices then.”
That beer duty is again scheduled to rise above the rate of inflation in March is another reason for maintaining the status quo on price, explained Karen, who buys through local wholesaler JW Gray and Highland Brewing Company, the Orkney-based real ale brewer.

We’re bearing the extra cost ourselves as our customers are sensitive to price at the moment.

“Budget time is normally when we review the price as that links in with the start of the summer as well,” she said.
“That’s kind of traditionally when we would revise our prices.”
A similar stance is being taken at Glasgow pub Hielan Jessie, where owner Billy Gold said he was likely to put his price rise on hold.
He said: “With a hefty price increase it’s back to the old story: ‘what do I do?
“Do I swallow it, make margins even tighter and move one day closer to not being able to pay my bills, or do I pass it on to my customers and watch my volumes fall off?’
“There will be a duty increase in the Budget, I think that’s a given.
“I don’t like to put an increase on with the brewers and an increase with the Budget – I try and work it out and consolidate it into one increase, rather than two close together.
“That’s what I do if I can afford it.”
Gold buys the bulk of his beers from Tennent’s and claimed the Glasgow brewer’s rise is “more proportionate” in the current climate compared to the rises announced by others.
“I’d rather it didn’t happen [the Tennent’s rise], of course,” said Gold.
“I understand why it’s happening, but I think the others are displaying a total lack of grasp of the Scottish market.
“They’re betraying the fact they are great big companies and don’t have a good grasp of local [conditions].
“They probably don’t see us as any different from England – it’s a UK-wide increase – and don’t pitch their increase to suit the Scottish market.
“The Scottish market is very, very fragile, as we all know, and there are still pubs going under.”
Not every operator appears to have the flexibility to absorb the latest increases, though.
At Niki’s Lounge in Galashiels, 2011 winner of the SLTN Community Bar of the Year award (in association with McEwan’s), Norman Maciver confirmed that his prices would be going up to allow the business to stand still.
“Two of my suppliers are up already and Heineken is going up in February,” said Norman, who also buys from Molson Coors and Carlsberg.
“It’s no surprise really – it’s just the usual letters you get from them after the new year.

The Scottish market is very, very fragile, as well we all know, and there are still pubs going under.

“When I get letters like that I obviously have to [review prices] and apply what we have to, and will probably add 10p to every pint next week just to keep it as it is.
“We’re not making any money – it’s just to keep things covered.”
Fortunately for Norman, his regulars appear to understand the position the business is in.
“It’s not too bad,” he explained.
“Everybody knows what’s going on. I show them the letters and it’s kind of expected.
“They know we have to, to keep things how they should be.
“It’s not good news, but they know it’s just the way things are with every place.”