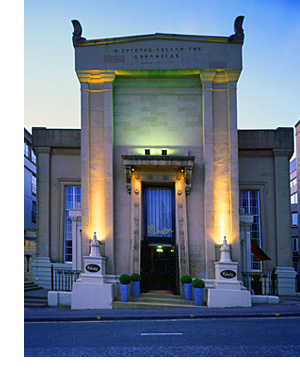 MALMAISON is set to launch a hotel in Dundee next year after acquiring the lease of the former Tay Hotel.

The listed city centre building is at the heart of the £1 billion Dundee Central Waterfront Development regeneration project, which will include a V&A museum. Malmaison, which, together with Hotel du Vin is owned by MWB Group, has taken a 35-year lease on the building, with an option to extend it for a further 35 years.
Work on the 91-bedroom hotel, which will become Malmaison’s fourth hotel in Scotland, is due to get underway in spring; it’s expected to open in May 2013.
The Dundee hotel will be Malmaison’s first since it concluded a refinancing agreement last year. It currently operates 12 hotels across the UK, including properties in Glasgow, Edinburgh and Aberdeen.
Gary Davis, who replaced Robert Cook as chief executive of Malmaison and Hotel du Vin last month, said the firm will work with developer MEC Services to create a “lifestyle boutique hotel”, which will bring 120 jobs.
“The regeneration on the Dundee waterfront is already underway and we are delighted to have secured the lease on this property that will enable us to create a prestigious hotel on the site,” he said.
“My objective is to oversee an expansion of the Malmaison and Hotel du Vin business and I expect that this hotel will be the first of many for these fantastic brands.”
Ken Guild, leader of Dundee City Council and chair of the Dundee Waterfront Board, welcomed the addition of the hotel brand to the development on the River Tay.
“We are delighted to welcome Malmaison to Dundee as a key part of the new waterfront, particularly as the new hotel will result in the restoration of one of our finest historic buildings as a landmark destination right at the heart of the regeneration of the city.”
The agreement to lease the former Tay Hotel building was concluded by Davis, who was appointed chief executive of Malmaison and Hotel du Vin in January.
Davis joined from the De Vere Group, where he was chief executive of its Village hotels, which are located across England. Previous Malmaison and Hotel du Vin chief executive Robert Cook was appointed to Davis’s former role at De Vere.
Davis said he aims to take the Malmaison and Hotel du Vin groups on to the next stage of their development.
“As well as consolidating and growing their position in the UK, we aim to take Mal and HdV into new markets with a dynamic and deliverable plan,” he said. “My key objective is to ensure that both Mal and HdV maintain their position as market leaders in innovation and service standards within the hospitality industry.”