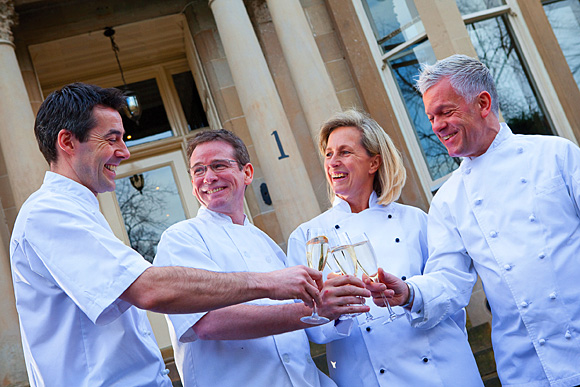 CHEFS past and present collaborated at the stove at Hotel du Vin at One Devonshire Gardens last month to mark the Glasgow hotel’s 25th birthday.

Executive chef Darin Campbell was joined by Suzanne Ritchie, the hotel’s first chef, as well as former One Devonshire Gardens chefs Jim Kerr and Andrew Fairlie, who worked together to create a five-course menu inspired by each of their signature styles, as well as a course inspired by former executive chef Paul Tamburrini.
Dishes included Fairlie’s oak-smoked lobster, Campbell’s roast loin of venison and Kerr’s wild sea bass and halibut.
The menu was served at a VIP lunch last month, with all four attending chefs hosting a table.
“The anniversary lunch was all about celebrating the hotel’s fantastic history and success over the past 25 years,” said general manager Andy Roger, who took the reins at the hotel last year.
“It really was very special to bring together, for the very first time, so many of the past greats that helped make One Devonshire Gardens what it is today.
“The hotel continues to be a well-loved Glasgow institution and we look forward to the next exciting 25 years.”
Now located in a series of five converted town houses, One Devonshire was opened in 1986, positioning itself as one of Britain’s first boutique hotels.
Initially the hotel occupied just one of the townhouses, taking its name from the address, No. 1 Devonshire Gardens, but has expanded gradually over the last 25 years to occupy the entire terrace.
In 2007 One Devonshire Gardens was bought by the Hotel du Vin and Malmaison Group, which subsequently spent £3 million refurbishing and extending the property.
Campbell took over as executive chef last June, after former executive chef Paul Tamburrini left to launch Edinburgh brasserie The Honours with fellow chef Martin Wishart.
Suzanne Ritchie was executive chef at the hotel from 1986 to 1987 and now owns Mise en Place Cafe and Deli in Glasgow.
She was succeeded by Jim Kerr, who was executive chef until 1990 and is now executive chef at Mar Hall. Fairlie occupied the post between 1994 and 2001.