FENTIMANS has compiled a range of soft drink cocktails for consumers looking to take things a little easier after a season of festive decadence.

The drinks, based on the firm’s range of botanically-brewed beverages, include Winter Rose – Fentimans Rose Lemonade mixed with a fresh strawberry and crushed ice – and The Reet Thing – Curiosity Cola mixed with lime cordial and served over ice with a slice of lime.
The Reet Thing is inspired by a billboard ad for Curiosity Cola Fentimans staged in Newcastle’s Scotswood Road, which the north-east of England firm described as a light-hearted challenge to the giant of the cola market.
“As producers of an adult soft drinks range, we want to make soft drinks more exciting for those who are not consumers of alcohol, including drivers, pregnant women or simply non-drinkers,” said Fentimans’ MD and master brewer Eldon Robson.
“January is definitely a quieter time of year but as someone who has a birthday in January, I don’t think the fun needs to end on the 2nd! However, lots of people either go ‘on the wagon’ or are simply wanting to enjoy a soft drink.”
Also included on the new ‘mocktail’ list is the Tenderberry, which combines Fentimans Traditional Ginger Beer with grenadine, strawberries and double cream over ice.
Looking ahead, Robson sees an opportunity for products like Fentimans as consumers demand more choice and operators focus more and more on food. 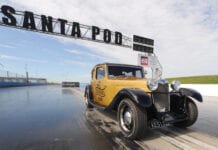