ON an exotic holiday or simply relaxing at home with family and friends – it’s anyone’s guess where Edinburgh chef Dominic Jack is right now.
Having taken the bold decision to close his Castle Terrace restaurant for a month from December 22, the chef patron is taking a well-earned break from the kitchen he has barely left in the past 18 months.
It’s not that he necessarily wanted a holiday – Jack is the first to admit he’s a workaholic. But it’s his way of making sure standards at the restaurant remain at the same consistently high level. His hands-on approach has paid handsome dividends, though. 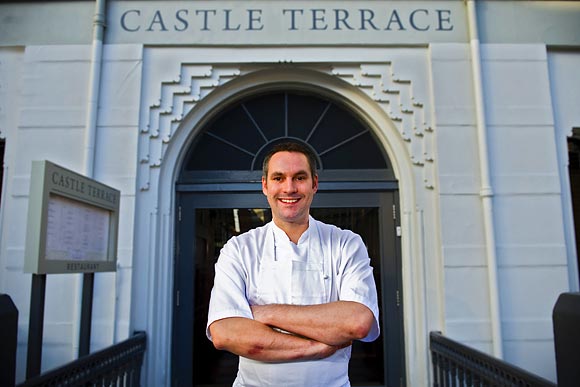 Just six months after its launch last July, Castle Terrace was awarded a Rising Star by the Michelin Guide, before going on to earn three AA rosettes last September and a coveted Michelin star the following month. Castle Terrace rounded off the year by picking up the SLTN Restaurant of the Year award (£35 and over), in association with Bunnahabhain.
Far from basking in the glory, Jack sees the awards as encouragement for him and his 30-strong team to raise their game even further.
“It’s great, I’m really, really pleased with how it’s gone so far,” he told SLTN last month.
“It’s great to get that kind of recognition and it’s good for the team. The awards have spurred us on and we want to keep up the momentum. It also shows us that we’re going in the right direction.”
Not that it seems there was ever any doubt over the course Castle Terrace would take.
It saw Jack join forces with friend and fellow capital chef – and now business partner – Tom Kitchin, with whom he shares a similar approach to cooking.
The pair first met as teenagers working as commis chefs at Gleneagles in Perthshire before Jack left Scotland for London and then Paris – and a job at the three Michelin star restaurant L’Arpège. He went on to Hotel Vernet’s Les Elysées restaurant, before moving to three Michelin star restaurant Taillevent.
It was during his eight years in the French capital that Jack perfected the style of cooking that influences his menus today.
“I left Scotland because after Gleneagles there was nowhere really for me to go – the eating out scene was very different then to what it is now,” he recalled.
“While I was in Paris, I was on the phone to Tom [Kitchin] saying ‘you need to come out here, Paris is where it’s all happening’. So he came over and slept on my kitchen floor for what was meant to be two weeks and ended up being a year.”
The pair then parted company again when Jack was headhunted for the role of chef de cuisine at the Swissôtel in Istanbul in 2005. Kitchin returned to Edinburgh and opened The Kitchin in Leith with his wife Michaela the following year. It wasn’t long before Jack was heading back to the capital too, however.
“I was in Istanbul and this time it was Tom who phoned me and said ‘you’ve got to come back to Edinburgh’,” he said.
Jack returned to his home city in 2008 with a view to opening his own restaurant but the onset of the credit crunch put his plans on ice. What was meant to be a two-month stint at The Kitchin became two years until Jack found suitable premises – the former Abstract restaurant on Castle Terrace.
With backing from Kitchin and Michaela’s design skills, the space was transformed into a 60-cover restaurant with bar and private dining area.
The menu gave Jack the opportunity to combine two of his biggest passions: French cooking techniques and Scottish produce.
Adopting the same ‘from nature to plate’ philosophy as sister restaurant The Kitchin, Castle Terrace majors in locally-sourced ingredients, with around 90% of the produce Scottish. Jack deals with about 12 different suppliers, including Campbells Prime Meat, Burnside Farm Foods, Braehead Foods and Mark Murphy for fruit and vegetables.
These locally-sourced ingredients translate into dishes like pate of wild Scottish rose deer from Mertoun Estate; roasted tail of wild North Sea monkfish wrapped in Ayrshire ham; and Pithivier of wild Roxburghshire rabbit. The set lunch menu when SLTN visited included risotto of organic spelt from Doves Farm served with sautéed North Sea squid and octopus.
Jack said Scottish diners are more open to trying new dishes and ingredients than in the past.
“The eating out scene has changed so much – it’s great seeing people ordering things like offal and appreciating the difference between wild and farmed salmon,” he said.
“The Scottish octopus is something a bit different because they’re only available for a short time and we recently had white truffle from Alba in Italy, which is really expensive to buy – about £3000 a kilo – because it has a very short season, but it went down a treat.
“In August [when the grouse season gets underway], Tom and I go and collect the first of the grouse so we can get it on the menu. 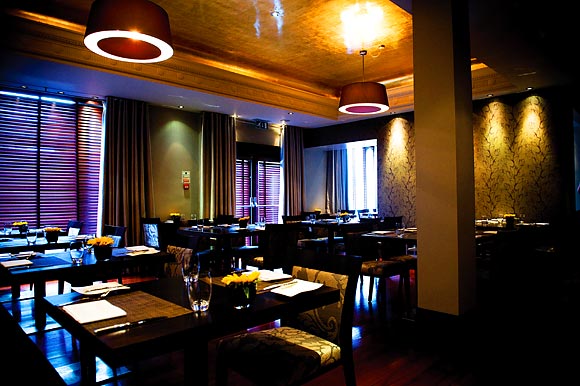 The restaurant is described as “simple and uncluttered”, blending neutral tones with flashes of colour.

“At the moment it’s quite difficult to get woodcock because it’s not been cold enough yet so Tom and I are fighting over what’s available – it’s quite competitive between us! We often phone each other to see how many covers the other has!”
Friendly rivalry aside, Jack is hoping 2012 will prove just as successful for Castle Terrace.
“The awards definitely spur me and the team on to become even better,” he added. “I’m here all the time, I’m a workaholic. And it’s important to keep the same team all the time so you get that consistency.
“To close for a week or a month is very expensive but it’s a sacrifice I’m willing to make.”
A spokeswoman for Bunnahabhain, which sponsored SLTN’s restaurant of the year award, said: “Bunnahabhain would once again like to congratulate Castle Terrace on winning the £35 and over category in the SLTN restaurant of the year award.
“The competition was intense as there were many excellent venues involved and Castle Terrace was a very worthy winner.”