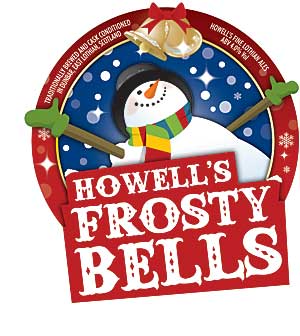 THE prospect of a festive ale, often dark in colour with hints of spice, will have many beer drinkers licking their lips in anticipation as Christmas approaches.

But in addition to providing drinkers with seasonal treats, there are solid commercial reasons why it’s worthwhile for brewers to bring out these occasional beers – and not just at this time of year.
Belhaven is getting into the festive spirit this year with Howell’s Frosty Bells – a 4% ABV ‘robust and rich dark winter warmer’ featuring hints of roasted chestnut, fruit and other festive flavours. Belhaven brewery director George Howell explained why seasonal ales are good for business – for suppliers and operators.
“Stocking a variety of seasonal ales that change regularly throughout the year offers customers the chance to trial new brews and seek out new flavours,” he said.“A calendar of what’s coming can help to create [a] buzz at the bar and generate interest from curious consumers.
“When it comes to Christmas there’s no doubt that the festive spirit leads many to try something different.
“However, carrying new brews that tie in with key calendar events throughout the year can also boost sales.
“Sporting events and national celebrations such as Burn’s Night can offer great opportunities.”
The view from other ale brewers is broadly similar, from Sinclair Breweries on Orkney via Alva’s Harviestoun to Kelburn in Glasgow.
At Harviestoun, which has seen volumes of Mr SnoBalls triple over the Christmas period in the last three years, boss Chris Miller said a seasonal programme is “an opportunity for brewers to let their loyal consumers experience variety from their favourite micro while attracting new consumers to [a new] beer type”.
The point was emphasised by Norman Sinclair, owner of the Orkney Brewery, who said the importance of festive ales in generating interest in brewers’ core products should not be underestimated.
This Christmas the brewer is offering two specials – Clootie Dumpling and Blizzard – to the Scottish on-trade.
“Seasonal ales are considered an important part of the portfolio we offer our customers because they offer some variety to the core products, but we may not necessarily wish them to be sustained throughout the year,” said managing director Norman Sinclair.
“Our festive ales in particular offer hints of the tastes you expect around Christmas with warming spices such as cinnamon, all spice, dried fruits and oranges, which all conjure up the image of a festive night round the fireside.”
Not surprisingly, such festive flavours are common to many of this year’s seasonal specials, including two ales being distributed by Glasgow-based Kelburn Brewery: the 6% ABV Kracker and the 4.5% Nollaig Mhor Brew, brewed exclusively for Nicholson’s pubs (part of Mitchells & Butlers) in central Scotland.
Owner Derek Moore explained that “drinkers look for something more full-bodied and stronger than the usual, with perhaps a hint of something extra, perhaps a hint of spice or the like”. He also said festive ales are generally “darker in colour” with “no definitive ABV”. Other brewers have a stricter policy when it comes to strength, including the Caledonian Brewing Company in Edinburgh.
Head of marketing and sales operations Tom Cannon, who confirmed Santa’s Little Helper was Caley’s festive pick this year (it rotates a list of five which also includes Escape Claus and Elf Esteem), said cask ale can be a responsible option for drinkers at this time of year.
“We always try and set quite a low ABV for the Christmas beer – it’s always in that 3.5% arena so you enjoy a few and not knock yourself out,” he told SLTN. “I think there’s a responsible drinking message that says cask allows you to have a few and enjoy it and not regret it afterwards.”
Santa’s Swallie, the long-standing offer from Perth’s Inveralmond Brewery, is also brewed to be “mid-strength”.
“We brew it at 4.3%, which is fairly mid-strength so it’s not overly-strong,” owner Fergus Clark told SLTN.
“Because at Christmas time you get a lot of heavy food around we put a bit of nutmeg in it which helps cut through the rich food.
“It’s a good complement to the kind of fayre that’s about at Christmas.”