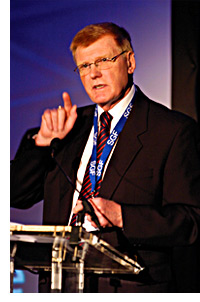 A GROUP representing the independent off-trade has called on the Scottish Government to do more to help the sector through the continuing economic malaise.

The Scottish Grocers’ Federation spoke out after new figures showed retail sales had fallen on a like-for-like basis in Scotland for the fifth time in six months.
The Scottish Retail Sales Monitor, from the Scottish Retail Consortium, showed that like-for-like sales had declined by 1.5% in the four weeks to October 29 – indicating that the sector had yet to benefit from the Christmas shopping effect.
Total sales were down 0.1% over the period compared to October 2010, when they had increased by 1.4%. It was said to have been the third total sales decline in Scotland in the last six months.
The SGF, which represents convenience stores, said the survey showed the continuing effects of the squeeze on household incomes, suggesting that consumer confidence in Scotland was lower than elsewhere in the UK. He called on the governments at Westminster and Holyrood to do more to help retailers survive the crisis.
“Retailers, like households, are not immune from the dual pressures of contracting incomes and rising overhead costs,” he said.
“Whilst we accept that the economic outlook will continue to remain bleak for some time, we also believe that government – both UK and Scottish – could be doing more to help.
“Action on rising energy costs, freezing the National Minimum Wage for 2012, holding back planned rises in the business rates bill for next April and reducing the regulatory and legislative burden would all go a long way
to help retailers weather this storm.”
The SRC, whose members include supermarkets, said the figures on food and drink sales showed that shoppers continued to take advantage of promotions in the pursuit of value and stretching household budgets further.
Its analysis of the October figures also suggested that people put off some purchases to focus on their immediate needs only.
“Retailers are still hoping for some festive magic but these gloomy figures are not a good start to the festive build-up,” said SRC director Ian Shearer.