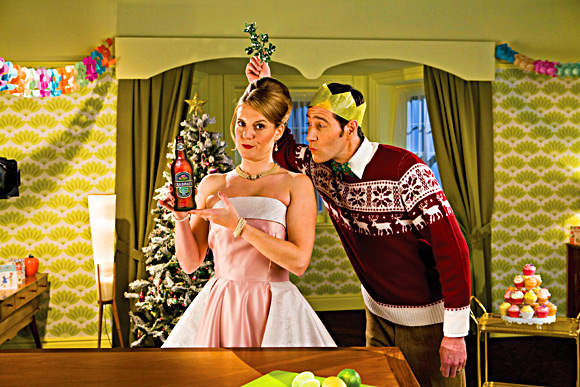 DRINKS firm Halewood International is banking on ITV drawing a big audience share for its Christmas output in the coming weeks.

The company’s Crabbie’s Alcoholic Ginger Beer is sponsoring all of the channel’s Christmas programming throughout December, a deal that will see sponsorship idents appearing on ITV1, ITV2 and STV.
Al Cross, marketing controller of the Crabbie’s portfolio, described the deal as a “fantastic fit” for the brand.
“The programmes included in the Christmas package are a great platform for Crabbie’s Alcoholic Ginger Beer to engage with its target market and drive awareness of the brand,” Al said.
The deal is part of a wider festive push for Crabbie’s which also includes a heavyweight television advertising campaign.
The campaign, which kicked off earlier this month and runs until December 11, sees 20-second ads appearing in prime-time slots on several different channels and around shows such as I’m a Celebrity Get Me Out of Here, Coronation Street, Emmerdale, Grand Designs and The Secret Millionaire.
The ads, featuring the George and Camilla characters, will promote Crabbie’s Alcoholic Ginger Beer as well as the recently-launched Crabbie’s Spiced Orange.
Halewood International said it expects the campaign to drive sales of Crabbie’s products in both the on and off-trades.
The ads will be supported by social media activity, including a ‘countdown to Christmas’ campaign.
Cross said that with the brand’s “biggest ever Christmas campaign” breaking, the impact made by new variant Spiced Orange, and the new sponsorship deal with ITV, it is an “exciting” period for Crabbie’s.
“Crabbie’s will air during prime time slots across multiple channels every day until the New Year,” he said.
“Our feedback from previous high density TV campaigns has revealed massive uplifts in sales and so we really are urging customers to stock up for Christmas to avoid missing out on the continued demand for Crabbie’s Alcoholic Ginger Beer.“
Crabbie’s Spiced Orange launched in 500ml format last month and has been supported by sampling activity across the UK.
Halewood is planning to launch a four-pack of 330ml bottles in February 2012.
Its introduction followed the launch of Crabbie’s Black in the summer.
Crabbie’s Black, a stronger, 6% ABV version of Crabbie’s Alcoholic Ginger Beer, is oak aged for a stronger and more complex flavour.