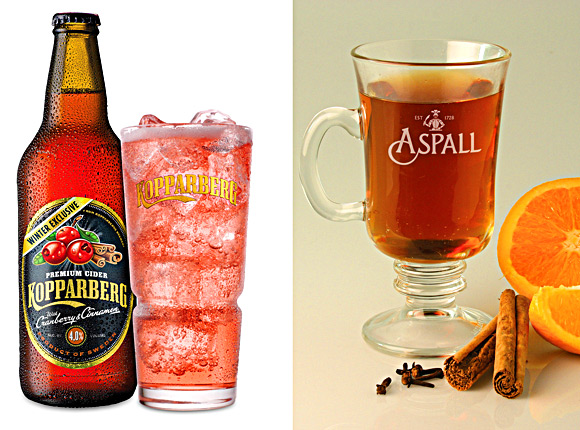 CIDER firms have nailed their festive colours to the mast, with two unveiling seasonal specials in recent weeks.

Kopparberg distributor COS Brands has launched a limited edition Cranberry & Cinnamon version of the Swedish cider, while Suffolk-based Aspall has reintroduced its mulled cyder for the fourth consecutive year.
Available on draught until the end of January, Aspall’s mulled cyder is designed to be served warm with slices of orange.
The 4.7% ABV cider is made from Aspall Draught Suffolk Cyder blended with mulling spices to create a flavour described as “reminiscent of bitter-sweet toffee apples”.
Aspall is supporting the relaunch with branded glasses complete with handle for holding hot drinks and a third-of-a-pint line indicating the serve size.
Geoff Bradman, Aspall’s joint managing director, said the premium style of serve “enhances the drinking experience” and introduces a “treating” opportunity for the festive season.
“Sales are continuing to rise every year as the product truly captures the imagination of consumers,” he said.
“Last year we sold three times the mulled cyder volumes of 2009 and had to make two additional batches during the season. With the growing list of on-trade customers who sell the product, we are now forecasting that this year’s volumes will be treble those sold last year.
“Our cyders lend themselves extremely well to food matching and our mulled cyder is no exception, complementing a broad range of popular winter dishes.”
Kopparberg’s new limited edition winter variant – a blend of apple cider with cranberry juice and cinnamon – is described as slightly drier than the other variants yet “unmistakably Kopparberg in character”.
Available until March, the 4% ABV cranberry and cinnamon variant replaces Kopparberg’s inaugural seasonal variant, raspberry and mint, which was available during the summer.
“Launching our next seasonal variant allows Kopparberg to continue this tradition of innovation but without creating an endless range, which can be frustrating to publicans, retailers and consumers as space constraints will not allow for every variant to always be made available,” said managing director Davin Nugent.
“We believe the key to the success of our seasonal range is if consumers do not want it to go, and that has certainly been the case with Kopparberg Raspberry & Mint.
“No one wants unhappy customers of course but in Cranberry & Cinnamon we believe that consumers of Kopparberg will be delighted with our new offering.”