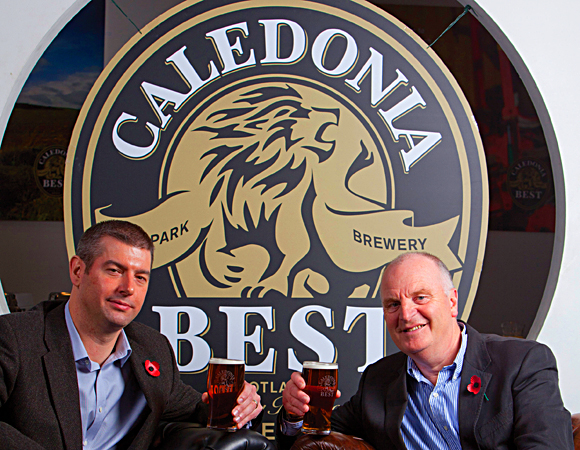 TENNENT Caledonian Breweries (TCB) is aiming to extend its dominance of the Scottish lager scene to the ale market with the launch of a major new product.

The reinvigoration enjoyed by the Glasgow brewer since its acquisition by Magners owner C&C Group in 2009 continued last week when it debuted Caledonia Best, a new low gravity ale.
The 3.2% ABV beer, which seems primed to go head to head with category leader Belhaven Best, is made exclusively with barley grown in Scotland – a commitment the brewer hopes to extend to other TCB products in future.
And in a further boost to the Scottish farming industry, the company pledged to create a “seed fund” that will see 5p from every pint sold in the first six months go towards sustaining farming and brewing in Scotland.
Caledonia Best was showcased at The Lighthouse in Glasgow by TCB’s new joint managing directors Steve Annand (commercial) and John Gilligan (sales).
Annand told the press conference that the brewer was continuing a legacy that saw it dominate ale exports in the 19th century with the launch, albeit the focus of Caledonia Best will be on the home market initially.
He said its own research had shown consumers were looking for greater variety and higher standards from the draught beer market.
“Consumers are at the heart of everything we do; we listened to Scottish drinkers and they told us they were looking for more choice at the bar,” he said.
“They’re looking for high quality ingredients and great quality in every pint.”
The liquid itself was created by head brewer David Shearer, who has been with TCB for 22 years, in collaboration with up and coming brewers from Heriot-Watt University in Edinburgh. The fruit of their endeavours is described as a “perfectly balanced pint” with a “clean aroma” and “full, smooth flavour”.
The beer’s most obvious competitor is Belhaven Best, though its name also echoes another big player in Scottish beer, the Caledonian Brewing Company.
Annand, dismissed the notion the name could confuse drinkers, and emphasised his confidence in the potential of the new product.
“Consumers are becoming more and more sophisticated about knowing where products come from and where they are made,” he said.
“We’ve been working with the logo for the brand as far back as the 1980s and have the trademark for the name.”
His comments were echoed by Gilligan, who also insisted the new ale would not affect TCB’s distribution deal with Belhaven. “It’s about extending our portfolio and giving the consumer and the customer, the publican, a choice,” he told SLTN.
“It’s not about anything else.
“We have distribution agreements with other people who sell other ales, like the Caledonian Brewery, and distribution agreements within other people who sell lager, like Budweiser.
“There’s nothing unique about the distribution agreement.”
Caledonia Best is the latest in a series of major developments made at TCB since the C&C deal went through.
Tennent’s Lager signed a deal to sponsor the Old Firm, and has returned to TV advertising, while a new centre for hospitality education, the Tennent’s Training Academy, opened at its Wellpark Brewery.
Annand said it was a “very exciting time” for TCB.
“Wellpark has never been busier; there’s a real buzz as we move into a new period for Tennent’s,” he said. “We’re unveiling a new addition that’s rooted in our long heritage; it marks the start of a period of dynamic growth [for TCB].”