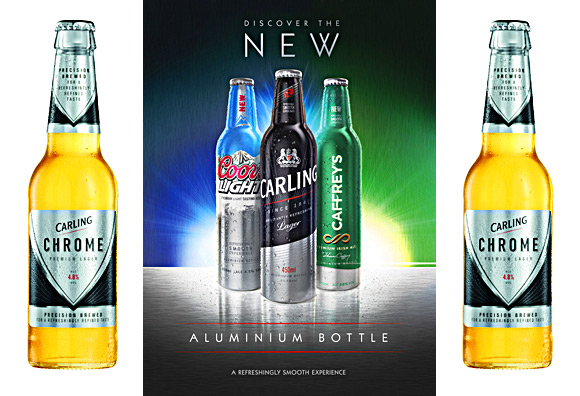 MOLSON Coors is continuing the rejuvenation of the Carling brand with the on-trade launch of premium beer Carling Chrome.

The brewer, which is spending a claimed £7.3 million on the Carling revamp, debuted Chrome in the off-trade this summer.
The beer, which is aimed and men and women, is described as a ‘refined’ premium lager offering a balance between the bitterness of hops and the ‘malty sweetness’ of barley and wheat.
Coors is investing in an outdoor advertising campaign and supplying visibility kits to the on-trade as part of the next launch phase; television ads are to follow in the new year.
Phil Whitehead, managing director of Molson Coors Scotland, said the company is hoping to fill a gap in the market with the 4.8% ABV beer.
“Our in-depth research into barriers to choosing beer on certain occasions has led to a product with a less bitter taste and just the right amount of carbonation ‘bite’ to make it extremely refreshing,” he said.
“We are looking forward to building on the overwhelmingly positive feedback we’ve had from the on-trade and consumers alike for Carling Chrome.”
Coors has recommended that venues sell Carling Chrome for £2.95 a bottle.
Chrome’s on-trade arrival comes as the brewer launches new bottle designs for three core brands, with Coors Light, Carling and Caffrey’s now available in 100% recyclable aluminium bottles.
The brewer said the new bottles, which are significantly lighter than their glass equivalents, will help to reduce its carbon footprint, and provide a safer alternative to glass bottles.
As well as the environmental benefits brought by recycling the bottles (saving up to 95% of the energy needed to make aluminium from its raw materials), Coors said, the reduced load weight will cut carbon emissions from delivery trucks.
The brewer is said to have consulted with the Carbon Trust in developing the new bottles.
“Beer is losing volume in both the on and off-trades, [but] we’ve recognised an opportunity to protect everyday lager from decline and move towards growth through differentiation, innovation and constant improvement in both our products and their packaging,” said Jeremy Gibson, director of innovation at Molson Coors.
“The consumer response to the aluminium bottles has been overwhelmingly positive.
“Consumers told us the new packaging offers a better drinking experience by making the beer cold and refreshing and flowing better than a glass bottle and is a perfect size.
“The bottles’ stylish look will create excellent standout and huge consumer interest, helping our customers to sell more.”
In the on-trade, the aluminium bottles are initially being introduced to outlets in Scotland and London.
The brewer is supporting the new bottle designs with what it describes as a ‘package of support’ to drive purchase.