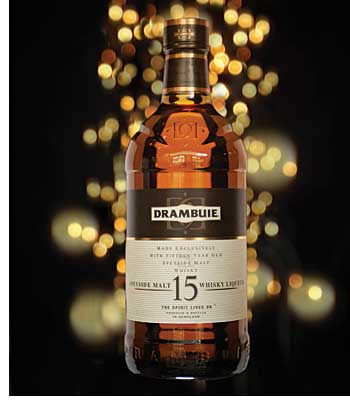 SCOTLAND has been identified as a “priority region” in the UK for Drambuie this Christmas as the whisky liqueur aims to make the most of its most lucrative time of the year.
Global marketing director Tim Dewey confirmed last week that the brand would be back on TV screens from the third week in November and over the Hogmanay period with a campaign that carries “50% more weight” than last year.
And to ensure its message reaches the on-trade Drambuie has appointed a new brand ambassador in Scotland.
Bruce Hamilton, formerly of Montpeliers, Dragonfly and Bramble in Edinburgh, is working with bartenders and operators three days a week to highlight simple Drambuie serves as the brand seeks to maximise its presence on Christmas drinks lists.
Hamilton is also promoting new Drambuie 15, a version of the liqueur based on 15 year old single malt that’s recommended served neat or over ice.
Dewey told SLTN the importance of Christmas can’t be overstated for the Drambuie brand.
“As much as we try and build sales outside Christmas, it’s always make or break for our year so it’s important we do well,” he said.
“The good news for us in Scotland is that it’s the only market we’re actually doing TV advertising in this year.
“We’ve identified Scotland as a priority region within the UK and we want to increase our investment in Scotland to try to aggressively build the brand. The starting point is this Christmas.”
The message that Drambuie can be enjoyed in simple long serves will be central to the campaign, which again bears the ‘spirit lives on’ strapline.
The key serves are Drambuie with ginger beer and also Coke.
Dewey said the brand combines well with cola, which he said has the added benefit of being the preferred mixer in 80% of long spirits drinks.
The two serves were marketed to music fans at this summer’s Rockness festival near Inverness and Dewey said the younger audience had responded well.
“We did some research and found that it really changed the younger legal drinking age consumers’ view of Drambuie as a brand,” he said.
“People said it was positively unexpected and we’re increasingly looking to build on it.”
The brand has also launched a new cocktail initiative – Rusty Drinks.
Building on trademarked Drambuie cocktail the Rusty Nail, which helped put the brand on the map in the States, the idea is to put a “Drambuie twist” on classic cocktails. The Rusty Margarita, for example, sees the traditional recipe altered with Triple Sec replacing the liqueur.
Dewey expects the initiative to be more successful than past dalliances with cocktails, as the recipes are familiar to bartenders and can be recreated at home.
New ambassador Hamilton is charged with briefing bartenders on the cocktails as well as long serves and the Drambuie 15.
Dewey said his appointment is a crucial one for the brand.
“We recognise it’s not just about investing above the line – we’ve go to do more on the ground to help people in the trade understand Drambuie and feature it in their bars and restaurants,” he added.