ALMOST 10,000 clubbers have given the thumbs up to a new fingerprint ID scanner – less than four weeks after it was installed at a Glasgow club.

The Scannet system, which operator Carlo Citti initially launched in Campus on Sauchiehall Street before rolling it out to sister venues O’Couture and Club 520, requires customers to register their passport or driving licence details and provide their thumb print. 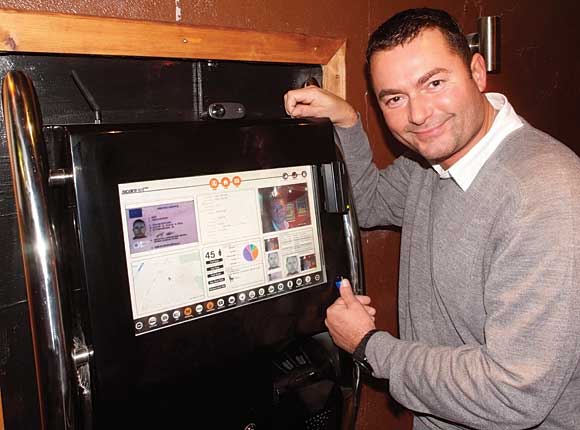 Thereafter clubbers are only required to provide a thumb print when they visit as the system, which can detect fake ID, retains the passport or driving licence details and attaches it to a biometric image of the fingerprint.
The system brings up the details, age and photograph of the person on screen as soon as their thumb print is scanned; customers who don’t want to provide a print are issued with a magnetic strip card.
The system links Citti’s three venues, meaning if someone’s ID is rejected the information will be communicated to the other outlets.
Citti told SLTN installing the equipment, a project he has been working on for the past two years, has helped his stewards enforce the challenge 25 age verification legislation, which came into force on October 1 as part of the Alcohol Act.
“This [legislation] means that people who look under 25 have to carry ID if they want to get into licensed premises,” he said.
“The new ID scanners we have put in mean our customers don’t need to worry about losing important [ID] documents, and it will help make our venues safer.
“Customer safety is our top priority and this shows how seriously we take it.
“It’s also helping our stewards. Challenge 25 stops at our door now.”
As well as the legal and safety benefits the equipment brings the operator, Citti said it provides huge scope when it comes to marketing.
The Scannet system has a host of analytical features, and can provide information on the average age of customers, the most common postcode, the average distance customers have travelled to the club, the percentage of customers who arrived at the venue at a given time, and when customers celebrate their birthday.
Citti said he hopes other venues will consider installing the fingerprint scanners.
“We are talking to other clubs about it; it would be great if we could make Sauchiehall Street ID-free,” he added.
“It was a reasonable investment, particularly in tough times, but the safety and security of my customers comes first.
“There are other benefits; at the touch of a button I know exactly how many people are in the clubs at any given time, and we can use the system for marketing.
“But it’s about safety first and foremost.”